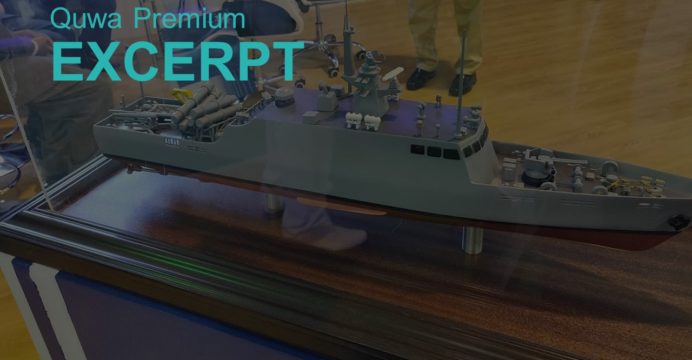 In its 2017-2018 disclosure, Pakistan’s Ministry of Defence Production (MoDP) stated that the Directorate General of Munitions Production (DGMP) signed-off on the development of a supersonic missile for the Pakistan Navy (PN). It is likely that the PN’s goal is to acquire a capability analogous to India’s BrahMos – i.e., a supersonic-cruising dual anti-ship cruise missile (ASCM) and land-attack cruise missile (LACM).

But while one can expect the PN to configure its larger ships – such as the forthcoming Type 054A/P frigate and Jinnah-class corvette/light frigate – with the supersonic missile, the optimal scenario would be to also arm smaller launch platforms. For the PN, this would mean its fast attack craft (FAC), such as the Azmat-class, but it should also include the Pakistan Air Force’s (PAF) burgeoning JF-17 fleet as well.

The rationale is, simply, to equip as many individual launch platforms with effective stand-off range attack capabilities as possible, especially those platforms that are available in large quantities. In the naval and air combat domains, this would basically be the PN’s FACs and the PAF’s JF-17s.

The benefit of this approach is that it helps Pakistan distribute its stand-off range attack capabilities across a large number of assets. The loss or even downtime of one (for maintenance, repairs, etc) does not lessen Pakistan’s anti-access and area-denial (A2/AD) capability within its exclusive economic zone (EEZ) and sea-lines-of-communication (SLOC). It also makes weakening the A2/AD threshold difficult because there are a large number of potential threats involved, i.e., attempting control will likely result in severe losses.

The Benefits of a Naval Supersonic Cruise Missile

The addition of a supersonic-cruising ASCM/LACM provides Pakistan with a varied anti-shipping capability, one that already has multiple subsonic options (i.e., Harbah, Zarb, C-802A, Harpoon, and Exocet).

Granted, while an analogous capability to the BrahMos, a supersonic-cruising ASCM/LACM is not a direct counter to comparable missiles. For that, the PN will need to invest in its anti-air warfare (AAW) capability, especially in terms of high-velocity, relatively long-range point-defence missile systems (PDMS).

However, as missile trends (especially in the East) move from supersonic to hypersonic systems, the PN is unlikely to be able to invest in the necessary air defence capabilities to stop such threats. Rather, it should focus on developing analogous capability – and widely deploying it – to deter the use of such weapons.

For the PN, its lowest-cost launch platform would be FACs. In fact, it is already arming its FACs for long-range land-strikes through the Harbah, which it test-fired from the PNS Himmat, an Azmat-class FAC, in January 2018 and April 2019. Pakistan did not disclose the Harbah’s range, but if it is based on the Babur, then a reach of 450-700 km is plausible. The Harbah is a subsonic dual-ASCM/LACM.

To effectively deploy the Harbah ASCM/LACM from the Azmat-class FAC, the PN must have developed (or is certainly on track to doing so) a robust network-enabled warfare environment. For land-attack, the PN need only send information about fixed targets to the FACs, but for anti-ship operations, the FACs would need real-time targeting information from long-range, off-board radars…