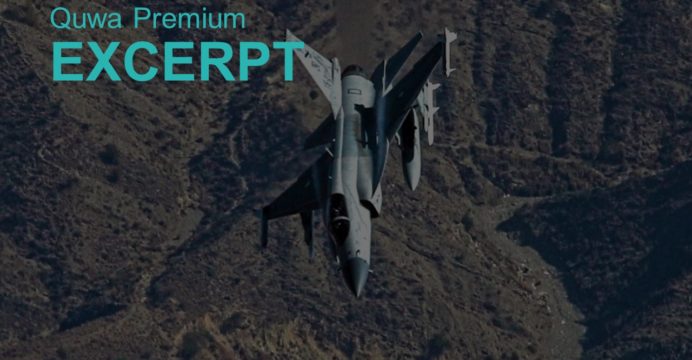 The Pakistan Air Force (PAF) sent three of its JF-17 Thunder multi-role fighter aircraft to the 2019 Paris Air Show, which took place from 17 to 23 June. Though the JF-17 flew at the event, much attention had gone into outlining the JF-17 Block 3, i.e., the JF-17’s first major iterative update.

Currently, the PAF has slated the JF-17 Block 3’s maiden flight for the end of 2019. It then expects to fly the fighter operationally in 2020. In an interview, the PAF Chief of Air Staff (CAS), Air Chief Marshal (ACM) Mujahid Anwar Khan, said that the PAF will also procure 26 twin-seat JF-17Bs alongside the 50 Block 3s.[1]

However, according to recent reports, the PAF is still finalizing the radar, electronics, and air-to-air and air-to-surface weapons package of the JF-17B and Block 3.

The centerpiece of the Block 3 will be its active electronically scanned array (AESA) radar. Though the PAF CAS stated that the selection is now down to “one of two new Chinese AESA radars,” (i.e., the KLJ-7A and the LKF601E) Alan Warns reported that the Leonardo Grifo-E “is still on the table.”

Leonardo unveiled the Grifo-E in 2018 as a low-cost AESA radar solution for lightweight combat aircraft. However, the Grifo-E uses gallium-nitride (GaN)-based transmit/receive modules (TRM), which are more efficient in terms of power consumption than older gallium-arsenide (GaA)-based TRMs.

The Grifo-E can simultaneously track up to 24 targets (the LKF601E can track 15), but its range for picking up “fighter-sized targets” are 139 km to 157 km (Leonardo). The LKF601E can track “fighter-sized targets” at up to 170 km. Otherwise, the Grifo-E, KLJ-7A, and LKF601E appear to have similar features, though the Grifo-E also includes an “inverse synthetic aperture radar” (ISAR) for “seaborne and airborne targets.”

Seeing how Leonardo opened an office in Islamabad, the company’s willingness to sell the Grifo-E is not a concern. Rather, the main constraint with selecting any Western radar is that the PAF will have trouble in integrating Chinese radar-guided munitions – i.e., the SD-10 beyond-visual-range (BVR) air-to-air missile (AAM) and the C-802 anti-ship missile (AShM) – to the radar. The PAF’s Chinese and Western partners will not share their respective source-codes to enable for such integration.

For More Information on the Pakistan Air Force, Check Out: