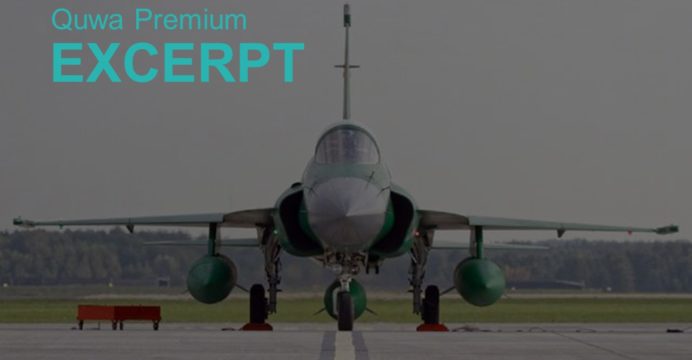 The Aviation Industry Corporation of China (AVIC) is using Airshow China 2018 to showcase both its strong advances in developing new aerospace and defence technologies as well as its growing export portfolio.

First, an improved version of the KLJ-7A from Nanjing Research Institute of Electronics Technology (NRIET). The KLJ-7A was originally revealed during Airshow China 2016 as a proposed AESA radar for the Block-III.

As per reports at the time, the KLJ-7A could detect ‘fighter-sized’ targets at up to 170 km, simultaneously track up to 15 targets, and engage four of them at once. The KLJ-7A is said to have more than 1,000 solid-state transceiver modules (TRM), providing it with much improved resistance to electronic warfare (EW).

However, the variant of the KLJ-7A apparently shown at Airshow China 2018 was equipped with slanted side-panel arrays on both sides, thus providing a wider detection range without the need for a mechanical arm or swashplate to move the main array. In addition, NRIET also unveiled a KLJ-7A variant with a moving array, it is possible that this version is meant to be a lower-cost alternative to the multi-array version.

Second, AVIC officially unveiled its proposed air-cooled AESA radar – the LKF601E. Interestingly, the radar shares the same performance specifications of the KLJ-7A (albeit based reports from 2016), i.e., the ability to detect ‘fighter-sized’ targets at 170 km, track 15 targets and engage four simultaneously.

According to LETRI, the LKF601E’s synthetic aperture radar (SAR) offers “high-resolution real-time imaging capability” with ground-moving target indication (GMTI). In other words, the LKF601E can lock onto tanks and other moving vehicles and engage them with radar-guided air-to-ground missiles (AGM). The radar’s SAR has a capture resolution of 1m2. In terms of air-to-sea, it has a range of 200-220 km.

Developed by the 601 Institute – i.e., Leihua Electronic Technology Research Institute (LETRI) – the radar is marketed as readily compatible with the JF-17, including, apparently, the Block-I and Block-II. In fact, a marketing video clearly shows LETRI engineers installing the LKF601E to a JF-17 prototype.

Secondly, the availability of the LKF601E implies that the PAF can proceed with upgrading its Block-I and Block-II fleet without necessarily having to remanufacture the fighters into Block-IIIs. Of course, the PAF could potentially opt for the latter route in the long-term.

The PAF has yet to officially reveal which radar it selected for the Block-III. However, considering that the previous PAF Chief of Air Staff (CAS) announced that the Block-III’s design was “frozen”, the radar decision has been made. Based on AVIC’s marketing video, one can confirm that at least the LKF601E was fitted to the JF-17, but it is unclear if that necessarily applies to the Block-III.