Examining the Case for Conventional Deterrence in Pakistan
January 18, 2020 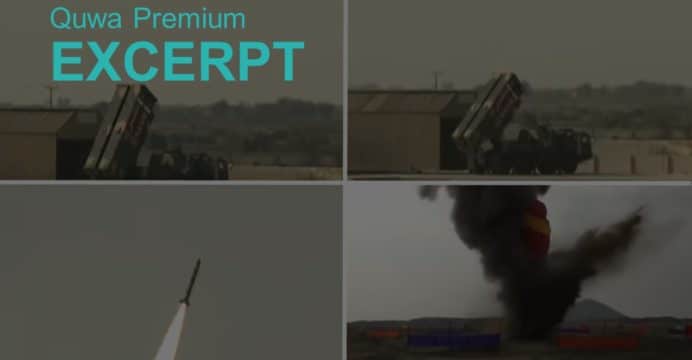 Examining the Case for Conventional Deterrence in Pakistan

The tests comprised of a quad-salvo test on January 24th and single-shot tests on January 28th and 31st.

According to the ISPR, the latter tests were for “testing the extreme inflight maneuverability, including the end flight maneuverability,” and that the Nasr could cut-through “any currently available BMD (ballistic missile defence) system in our neighborhood or any other system under procurement / development.”

The Hatf-XI Nasr (“Victory”) SRBM has been in service since at least 2013. It complements Pakistan’s now burgeoning inventory of miniature nuclear warhead-capable munitions, most of which (in terms of types) are land-attack cruise missiles (LACM), which were most recently tested in March 2018.

Besides enabling Pakistan to deploy nuclear warheads on a tactical munitions platform, the Nasr also plays the role of directly countering invasive mass-formations. To fulfil that role, the Nasr is a “quick response” system that can also leverage “shoot-and-scoot attributes” (ISPR).

To Pakistan, the Nasr is a means to mitigate India’s strong – and growing – conventional advantage over Pakistan’s own conventional capabilities. In fact, the ISPR’s statement from its most recent tests, notably the point about penetrating BMD, points to this intent.

However, is it enough to compensate for the lack of conventional capability?

In isolation of Pakistan’s ties with other countries, potentially, though that is not guaranteed.

As a Deterrence Rocket, the Nasr isn’t Enough Alone

The Nasr is a short-range system (range: 70 km), and with its effectiveness contingent on being within range of not just the intruding battle group, but its core (i.e., where the majority of a battle group’s assets are in place), it could require a measure of conventional support itself.

For example, a Nasr unit moving and staying in proximity to its targets would also be vulnerable to them, especially its aviation and long-range guided artillery assets. Of course, it can engage its “shoot-and-scoot” capability, but will its speed be enough to outrun a millimetric wave radar-guided missile? Unlikely.

The alternative point would be that once the Nasr salvo is launched, the delivery vehicle’s purpose is then complete and that it is expendable. However, a successful salvo launch is also contingent on multiple key factors: (1) identifying the integrated battle group’s (IBG) core and (2) being within range of the core.

The first factor is impossible to control – it is India’s prerogative to construct its IBGs, and in knowing that the Nasr has a range limit, a sparse formation with airpower could be its preferred option.

Pakistan could procure intelligence, surveillance, and reconnaissance (ISR) assets – especially airborne synthetic aperture radar (SAR) – to understand the composition of intruding IBGs and, via a network data-link, communicate that information to the Nasr firing unit.

However, the ISR capability must be extensive, it must be able to determine the IBG’s composition before it enters Pakistan. Yes, an electro-optical (EO)-equipped imaging intelligence (IMINT) satellite generates long-term insights about where the adversary is building its forces (e.g., by identifying new bases or roads), but it cannot be relied upon to build a real-time, dynamic visualization of the threat…