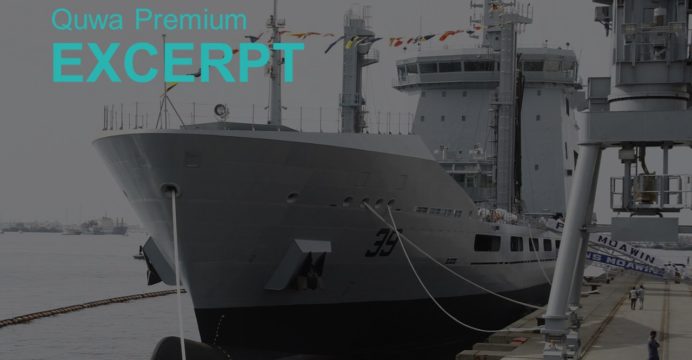 Designated PNS Moawin, Pakistan inked a contract for the tanker from Turkey’s Savunma Teknolojileri Mühendislik A.Ş. (STM) in January 2013. The price was reportedly $90 million US.[2] Prior to this ship, PNS Moawin was the name of a Dutch-built Poolster-class tanker in the PN; this new tanker is replacing it.

PNS Moawin’s steel-cutting ceremony had occurred at Karachi Shipyard & Engineering Works (KSEW) in November 2013. KSEW laid its keel in March 2014 and, in turn, constructed the ship by August 2016, at which point the Moawin was launched for sea trials.[3] In April 2018, it conducted its first survey mission.

As with almost all KSEW programs, the Moawin was built under license by STM and with support – through Kits of Material (KoM) and technical documentation – of the original equipment manufacturer (OEM).[4]

It is an off-the-shelf design, but KSEW lead the construction, integration and testing/trials of the Moawin. A key point in regards to integration is the fact that KSEW – under STM’s guidance – paired electronics and weapons from different suppliers, i.e., Turkey’s Aselsan and the UK’s Kelvin Hughes, among others.

The PNS Moawin has a full-load displacement of 16,400 tons. It has a hull length of 158.4 m and is capable of reaching a maximum speed of 20 knots when at full load. When at a cruise speed of 15 knots, the PNS Moawin has a range of 10,000 nautical miles.[5] The PNS Moawin is equipped with two Replenishment-at-Sea (RAS) masts (for solid and liquid cargo), a helicopter hangar capable of supporting a Sea King-class and a Dauphin (i.e. Z-9EC)-class helicopter, and two Aselsan STOP 25 mm cannons.[6]

It is not known when the PN intends to replace its other large auxiliary ship, i.e. the Fuqing-class PNS Nasr.

The PNS Nasr is (compared to the Poolster-class PNS Moawin) a newer ship; launched and commissioned in 1980 and 1987, respectively. For the PN, it is already 30 years of age. The natural course of action would be to procure a second STM designed ship and standardize the large auxiliary fleet on one platform.

In its yearbook for 2015-2016, Pakistan’s Ministry of Defence Production (MoDP) listed the construction of a new submarine rescue and salvage vessel as a prospective program.[7] Seeing that the PN is slated to operate 11 air-independent propulsion (AIP)-powered submarines by 2028 (and that too with potentially an additional set of miniature submarines), this could become a priority for the 2020s.

In terms of STM, this marks the completion of its first major naval project in Pakistan. STM is also leading the upgrade of Pakistan’s Agosta 90B submarines as well as construction of MILGEM Ada corvettes.

Pakistan Aeronautical Complex to Receive a CNC Machine from Turkey

Based on a series of tenders released in September and October, it is evident that the Pakistan Air Force (PAF) is still using its Siemens Mobile Pulse-Doppler Radars (MPDR)…[8][9] [full article available to Quwa Premium subscribers here]

On 15 October, the Pakistan Navy initiated its marquee maritime exercise, Sea Spark 2018. According to a press release by Inter Services Public Relations (ISPR), the exercise will span for “over two months” in the Arabian Sea and will involve the Pakistan Army and Pakistan Air Force (PAF)…[10][full article available to Quwa Premium subscribers here]

During the commissioning ceremony of the Pakistan Navy’s (PN) new tanker, the PNS Moawin, Turkey’s Undersecretary for Defence Industries (SSM) İsmail Demir, announced that Turkey is in talks with Pakistan to sell small quantities of electronic warfare (EW) systems and other armaments.[11][full article available to Quwa Premium subscribers here]