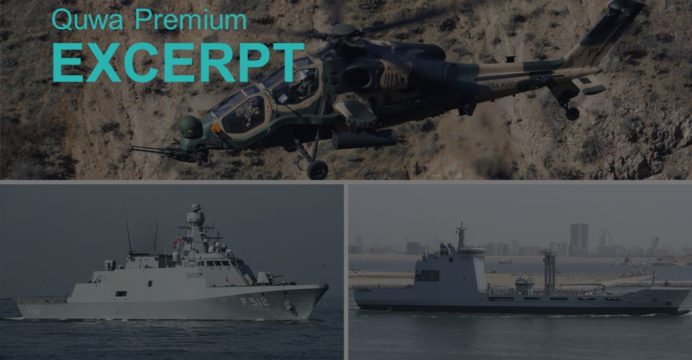 Since 2016, Turkey has booked nearly $3 billion US in big-ticket defence sales to Pakistan, with sold items ranging from 30 Turkish Aerospace T129 ATAK attack helicopters, four MILGEM Ada corvettes, a mid-life subsystems upgrade for Pakistan’s three Agosta 90B submarines to spate of smaller projects.[1][2][3] Through these programs, Turkey has cemented its position as one of Pakistan’s leading arms suppliers, second only to China and, in turn, effectively coming ahead of the US and Western Europe.

However, could Pakistan’s trust in the Turkish defence industry (quantifiable in $3 billion US worth of big-ticket expenditure) extend to more than just off-the-shelf procurement? With China, not only has Pakistan been able to secure capable big-ticket systems – such as the Type 054A frigate and Hangor (II) submarine – but it is able to develop strategically valuable conventional and deterrence capabilities.

Be it the Hangor (II) submarine, instrumented weapons test range or space satellite procurement, China is evidently equipping Pakistan to both develop and deploy land-attack cruise missiles (LACM). There is no scope for such access in the US or Western Europe. Rather, the US both rejects and, in fact, works to obstruct Pakistan’s efforts in strategically sensitive domains through sanctions and embargoes.[4]

Thus, it would be erroneous to expect Turkish-Pakistani defence ties to match in equivalence to those of China and Pakistan. However, there are more to Pakistan’s defence needs to simply strategically valuable capabilities, such as a myriad of tactical scenarios, such anti-submarine warfare (ASW) or close air support (CAS), where high-quality weapon systems could be sought.

This Quwa Premium report examines the viability of commercial offsets (tied to big-ticket defence purchases) in Pakistan. In this report, we briefly review the checkered history of offset packages, especially in the developing world | Read More

Of the signs that Pakistan is taking Turkey seriously is the fact that it is now relying on the Turks to supply mainstay assets, i.e. weapon systems that are to drive the majority of operational roles in their respective domains. For example, the T129 is slated to be the Pakistan Army Aviation Corps’ (PAA) mainstay attack helicopter by supplanting the legacy AH-1F/S from frontline use.[5] From counterinsurgency (COIN) missions to conventional anti-armour operations, the PAA will call upon the T129, which means that the T129 will serve an indispensable role. Likewise for the Ada, which will form one-third of the Pakistan Navy’s (PN) 2,000+ ton surface combatant fleet (alongside four Type 054A and four F-22P frigates).

It should be noted that both (i.e. attack helicopters and corvettes) could have been bought from China – i.e. at a lower-cost and, potentially, at no risk of sanctions (compared to the T129 and Ada). However, the Pakistan Army (PA) and PN have opted to not only spend a sizable portion of their respective budgets on Turkish solutions, but have opted for Turkish solutions to fulfill tactical – i.e. CAS and ASW – requirements. It is evident that these purchases are not novelties or inconsequential to Pakistan’s defence needs; rather, they are integral (albeit with a contingency in China should trade controls or restrictions arise).

Thus, it appears that Pakistan is sourcing equipment that is essential, but not strategically relevant where the US or Western Europe would be an obstacle…