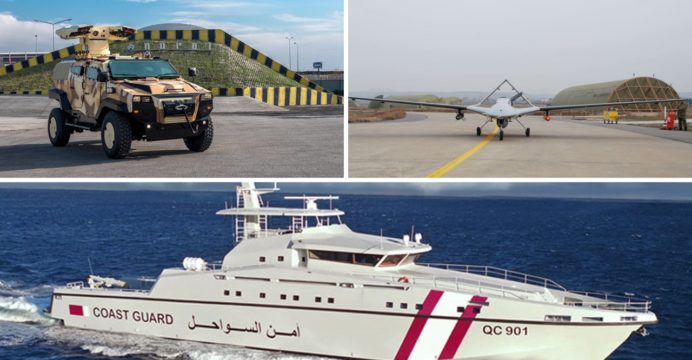 Turkey secured $800 million US in various defence from Qatar at the 2018 Doha International Maritime Defence Exhibition and Conference (DIMDEX), which was held from 12 to 14 March.

In addition, the Qatar Emiri Naval Forces (QENF) ordered two ‘cadet training ships’ (CTS) from Anadolu Shipyard, another Turkish shipyard. The CTS ships will each have a displacement of 1,950 tons along with a helipad for a medium-sized helicopter and crew compliment of 72 (Daily Sabah).

In terms of drones, Qatar signed to become the launch export customer of the Bayraktar TB2 unmanned aerial vehicle (UAV), a medium-altitude long-endurance (MALE) drone that entered service in 2015 with the Turkish Armed Forces. Bayraktar lauded Doha’s decision, stating that the TB2 was selected over UAV designs from the US, China and Europe (Daily Sabah).

Though the majority of Qatar’s defence consumption – in terms of monetary value-to-be-spent – is not running through Turkey, these sales are notable gains for the Turkish industry:

First, it strengthens Turkey’s position as an exporter of armoured vehicles, especially in the Arab Gulf region where Otokar and FNSS have seen adoption in the United Arab Emirates and Oman, respectively.

Second, Turkey’s naval industry is seeing growing activity for its patrol boats. While a firmly inked contract for the big-ticket MILGEM or its variants currently remains elusive, traction by Ares Shipyard, Yonca-Onuk, Anadolu Shipyard and others give Ankara confidence to actively promote its solutions to the world market, generating attention and customers which could potentially translate into major sales in the future.

Emulating the activities of Saudi Arabia and the UAE, Qatar is also looking to build a measure of domestic defence industry activity. To that end, the Qatari Ministry of Defence announced the formation of Barzan Holdings, a state-owned enterprise aimed to generate that activity in Qatar. However, besides some calls for studies, it is unclear how – if at all – Qatar’s forthcoming big-ticket acquisitions will factor into Barzan Holdings. That said, while it is unreasonable to expect Qatar to channel most of its procurement – even at the end-of-chain/output level (e.g. assembly) – domestically, niche or targeted focus in electronics or munitions could be a plausible avenue for building a portfolio benefitting the Qatar economy and boosting the domestic technology development and human capital base.