Saab highlights its market-strategy as niche provider and integrator
January 17, 2020 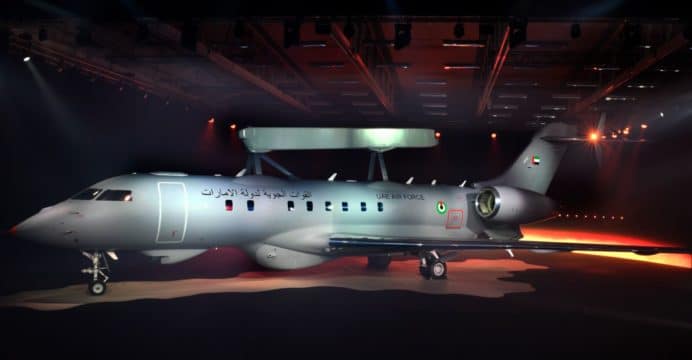 Saab highlights its market-strategy as niche provider and integrator

On 23 February Saab rolled-out the first GlobalEye airborne early warning and control (AEW&C) aircraft at its Linköping facility. Integrated to the Bombardier Global 6000, the United Arab Emirates (UAE) is the launch customer of Saab’s next-generation intelligence, surveillance and reconnaissance (ISR) platform. It also builds upon Saab’s expertise in radar development (for both airborne and surface-based solutions) and success in exporting those solutions to many countries, among them the UAE, Pakistan, Greece, Brazil, Thailand and Mexico. By offering a comprehensive suite of robust airborne, land and maritime/sea radars and integrated solutions, the Swedish defence giant is poised to be a leading global supplier.

The GlobalEye AEW&C builds upon the Erieye AEW&C platform, the latter succeeding through the 2000s as an accessible AEW&C platform, resulting in Greece, Brazil, the UAE, Thailand, Mexico and Pakistan as its customers. Its marquee element is the Erieye Extended Range (Erieye ER) active electronically-scanned array (AESA) radar, which uses new gallium nitride (GaN)-based transceiver modules (TRM). The Erieye ER’s GaN TRMs not only double its power-efficiency (IHS Jane’s), but also reportedly providing a 70% range increase (Aviation Week). The preceding Erieye has an instrumented range of 450 km with a surface coverage area of 500,000 km2 and altitude coverage of over 60,000 ft (Saab). Saab has also applied its GaN TRM technology to the next-generation of Giraffe radars, i.e. the Giraffe 1X, Giraffe 4A and Giraffe 8A. Saab hopes to leverage its technology to present a strong case for enhancing its end users’ capacity to detect stealthy targets, such as sea-skimming cruise missiles and next-generation combat aircraft.

The UAE is the launch customer of the GlobalEye. It ordered two systems in 2015 and added a third system to its order in 2017 (the third order cost $236 million U.S.). It currently operates two Erieye AEW&C on the Saab 340, these are slotted to be upgraded by Saab, but it is unclear if the upgrade will result in shifting the Saab 340 AEW&C into GlobalEye units or select subsystem additions from the GlobalEye.

Saab is interested in using the GlobalEye as a means to secure orders from NATO, especially as NATO intends to retire its E-3A fleet by 2035. According to Saab, the company is ‘having dialogues’ with the appropriate parties in this regard, though it is early to earmark any potential orders or other substantive traction. However, Saab’s proven record in successfully managing a diverse set of clients along with a strong product portfolio position it to access many big-ticket markets, including long-term recapitalization with existing customers, such as Greece and Pakistan.

While a substantial AEW&C upgrade, the GlobalEye – originally designated the ‘Swing Role Surveillance System’ (SRSS) – is meant for fulfilling multiple ISR roles. In this respect, Saab chose not to rely on its own intellectual property, but instead, acquire commercially-off-the-shelf (COTS) solutions. This includes the Leonardo Seaspray 7500E AESA radar for surface and maritime surveillance and FLIR Systems Star SAFIRE 380HD electro-optical and infrared (EO/IR) turret. It appears that the Seaspray 7500E is the GlobalEye’s primary sensor for surface surveillance – including synthetic aperture radar with ground-moving target indication (SAR/GMTI) – for supporting land and naval combat operations. This could manifest in the GlobalEye using its Seaspray 7500E radar’s SAR/GMTI mode to produce a situational awareness picture of the ground and feed that information (e.g. terrain and target location) to friendlies on land and in the air. Granted, optimal utilization of this capability is contingent on information-exchange networks, but it is likely that countries interested in the GlobalEye would have such systems in the procurement roadmap.

For Saab, serving as integrator of subsystems from different original equipment manufacturers (OEM) is a key aspect to its strategy. With the GlobalEye/SRSS, Saab integrated its own Erieye ER with the Seaspray 7500E and Star SAFIRE 380HD to the Bombardier Global 6000. One aspect of this strategy is that it frees Saab from having to develop and sustain different streams of niche products. Rather, it can solely focus on and perfect its large radar portfolio (Erieye and Giraffe), while deferring the rest – such as systems for ground and maritime surveillance – to a company already succeeding on that front, i.e. Leonardo. Further to this fact, Saab’s selection of the Seaspray means that the third-party buyer (e.g. UAE) benefits from an ubiquitous and mature system with scale and guaranteed cost-effective support.

Interestingly, Saab’s role as integrator is even more apparent with its accompanying Swordfish maritime patrol aircraft (MPA). In this case, the primary systems resulting in the Swordfish MPA are the Leonardo Seaspray 7500E, Star SAFIRE EO/IR pod and the Bombardier Global 6000. Instead of the Erieye ER, Saab is offering to tailor the Global 6000 for anti-submarine warfare (ASW) and anti-ship warfare (AShW), which will involve external hardpoints for ASW torpedoes and anti-ship cruising missiles (ASCM). In theory, Saab could offer its RBS-15Mk3 ASCM and Lightweight Torpedo, but that does not preclude it from making the Swordfish MPA compatible with the MBDA Exocet and MU-90 or Boeing Harpoon and Mk.56.

Saab’s defence market strategy has steered towards highlighting the company’s strength as an integrator of proprietary IP with the IP of others. Granted, the availability of the Gripen fighter, A26 submarine and next-generation corvette designs show that Saab will not exit its role as a platform OEM, but it is also clear that the company views itself as an OEM partner and integrator. In the AEW&C and MPA space, Saab partnered with Bombardier and Leonardo; in the naval space, with BMT Services; for offering short-range air defence solutions, with Denel Dynamics. In effect, Saab is not restricting the availability of its strengths to its own platforms (e.g. Gripen), but it is opening the door to prospective buyers to incorporate Saab’s IP into systems in numerous ways to enable for customized, but thoroughly-supported solutions.