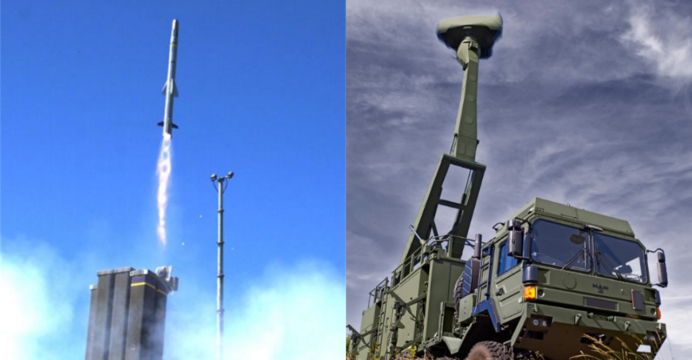 According to Defence Web, Saab had announced that the Giraffe AMB radar has been in use with the Umkhonto SAM for over the past six months. The system had also conducted successful missile firings.

This is not the first time that Saab and Denel had collaborated on an air defence solution. The Umkhonto was selected by the Finnish Navy – along with the Saab Sea Giraffe AMB radar – for use on its Visby-class corvettes. Of course, this is not to take away from the natural synergy between these two vendors. Saab has credible expertise in radar technology thanks to a wide range of products including, but not limited to, land and sea-based radars of varying range outputs as well as airborne early warning and control (AEW&C) platforms. Denel’s Umkhonto surface-to-air missile (SAM) is one of the company’s key product lines at this time, one that has seen a modest number of export successes (with Algeria being the latest).

Although it utilizes an infrared seeker at the terminal stage, the Umkhonto still depends on an external radar to track and identify targets and to guide the missile to a terminal-launch area. Until recently, the default surveillance radar offered with the Umkhonto was the Reutech RSR 320, a 3-dimensional (3D) dual-band surveillance radar. The switch to the Saab Giraffe AMB imbues the Umkhonto with a more modern 3D C-band phased-array radar with a coverage range of up to 120km.

Besides honouring the ground-based Umkhonto SAM system’s mobility-centric nature, the Giraffe AMB also caters for the forthcoming Umkhonto-EIR, which will boast an improved range of 35km (in contrast to the Umkhonto’s current 20km). By undertaking the integration and validation work, Saab and Denel have not only demonstrated that the Umkhonto-Giraffe pairing works in reality, but the two vendors now possess a complete and marketable off-the-shelf air defence system for prospective customers.

The most recent country to have apparently expressed interest in the Umkhonto was Pakistan. In June, the Pakistan Navy Chief of Naval Staff Admiral Muhammad Zakaullah made an official visit to South Africa. The Pakistani delegation had reportedly requested information on the Umkhonto. It is interesting to note that Pakistan is an existing user of various Saab systems, most notably the Erieye AEW&C system. With the Pakistan Navy interested in procuring four new corvettes from Turkey’s STM, there may be a possible radar and SAM opportunity for Saab and Denel, respectively.