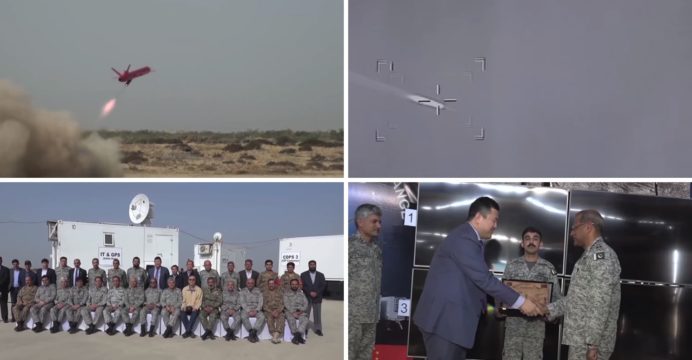 On 02 February, the Pakistan Air Force (PAF) announced that it established a Weapon Testing Range (WTR) at the Sonmiani Firing Range.

The state-owned Associated Press of Pakistan (APP) reports that the Sonmiani WTR was built with support from China. It will be used to examine and qualify both indigenous and imported munitions.

“The day marked a monumental episode in the glorious history of PAF as a state-of-the-art Weapon Test Range has been made operational to track the complete trajectory of the aircraft and launched missiles,” stated the PAF (via APP).

The PAF Chief of Air Staff, Air Chief Marshal Sohail Aman, also announced that the JF-17 is now in service with six PAF squadrons (up from five in 2017). This would total for 100 aircraft split evenly between the Block-I and Block-II. The name and base of the sixth unit has not yet been disclosed.

The Sonmiani WTR is an instrumented testing range for evaluating munitions. Such facilities are used as part of the qualification and certification process of an air-to-air or air-to-surface munition, i.e. to test and ensure that it meets desired parameters before induction. It is the first such facility established in Pakistan.

Although inaugurated by the PAF, the WTR will be of use to the Army and Navy as well provided it is equipped to examine launch from air, land and sea. In fact, such a configuration would allow Pakistan to use this WTR to test the full gamut of munitions, be it cruise missiles, precision-guided bombs, surface-to-air missiles, anti-tank guided missiles or even tank and artillery shells. Pakistan can also test drones as well as conduct detailed comparisons between prospective munition options from abroad.

The PAF did not disclose the specific systems at use at the Sonmiani WTR, but an instrumented range could include optical-tracking, telemetry systems, instrumentation radars, meteorological station and a command, control and communication suite. Overall, the WTR’s function is to measure a munition’s accuracy, flight profile and viability under various conditions, which can come from weather and/or the altitude of the launch platform (and/or the target), among other factors.

The WTR will likely factor into Project Azm, the PAF’s long-term program to domestically develop and produce munitions. The first of these appears to be the Range Extension Kit (REK) precision-guided bomb kit for Mk-80-series of general purpose bombs and the Ra’ad II extended-range air-launched cruise missile.