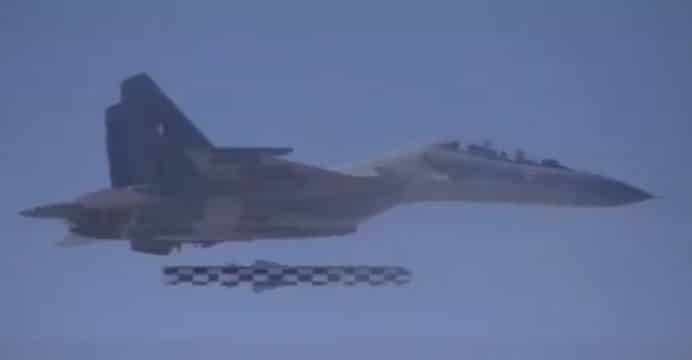 The Indian Ministry of Defence (MoD) outlined the launch process in its press release, stating, “The missile was gravity-dropped from the Su-30 from fuselage, and the two-stage missile’s engine fired up and straightway propelled towards the intended target at the sea in Bay of Bengal.”

According to the MoD, the BrahMos “is now capable of being launched from Land, Sea and Air, completing the tactical cruise missile triad for India.” The MoD states that the BrahMos ALCM weighs 2,500 kg and is capable of reaching a range of over 400 km. It can cruise at Mach 2.8.

The Times of India reports that 42 Su-30MKIs will be equipped with the BrahMos. The MoD stated that the BrahMos “will significantly bolster the IAF’s air combat operations capability from stand-off ranges.”

The BrahMos is a joint-venture between India’s Defence Research and Development Organization (DRDO) and Russia’s NPO Mashinostroeyenia. India funded 50.5% of the venture, named Brahmos Aerospace.

BrahMos Aerospace is aiming to both export the missile to various markets, especially in East Asia, and develop new variants (e.g. an extended-range variant leveraging India’s entry into the Missile Technology Control Regime as well as a lightweight variant with low-detectability on radar).

Collectively, the SAAW, Nirbhay and BrahMos provide India with stand-off range strike solutions tailored for different operational needs. For example, the BrahMos for moving and time-sensitive targets, the Nirbhay for fixed-installations and the SAAW for offensive counter-air operations.