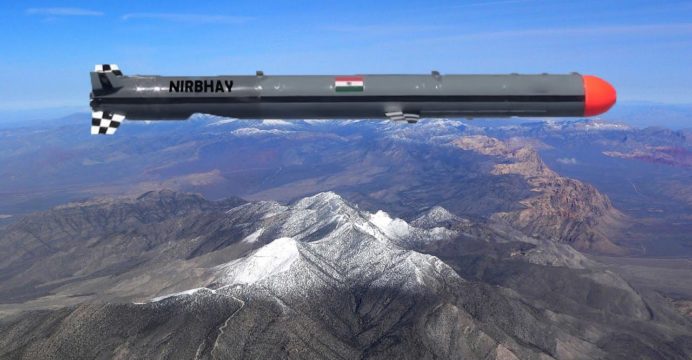 According to a press release by India’s Press Information Bureau (PIB), the Nirbhay cruise missile flew for 50 minutes to a range of 647 km. The PIB’s release states, “The flight test achieved all the mission objectives completely from lift-off till the final splash.”

The Nirbhay has a strike range of up to 1,000 km. It can travel at a cruise speed of Mach 0.7 and an altitude as low as 100 m. It is a two-stage design with a length of 6 m, diameter of 0.52 m and wingspan of 2.7 m. Its gross weight is 1,500 kg. The cruise missile’s guidance suite comprises of a domestically developed and produced Ring Laser Gyroscope (RLG) with a GPS-assisted MEMS-based Inertial Navigation System (INS).

DRDO’s test is the fifth since 2013. However, three of the Nirbhay’s prior tests (in 2013, 2015 and 2016) were unsuccessful. With the Nirbhay, India’s objective is to domestically secure a cruise missile that is directly analogous to the U.S. Tomahawk and Pakistan’s Babur. The Nirbhay will complement India’s supersonic cruising Brahmos with a sub-sonic solution, which is suitable for fixed targets.

The Nirbhay will also utilize a domestically developed miniature 4.25 kN turbofan engine – designated Manik – from DRDO’s Gas Turbine Research Establishment. The Economic Times had reported that for the recent test, the Nirbhay was equipped with a miniature turbojet engine instead of a turbofan powerplant.

In early November, DRDO also successfully tested its Smart Anti-Airfield Weapon (SAAW). The SAAW is a stand-off range air-to-surface glide bomb with a range of 70 km. It has a gross weight of 120 kg.