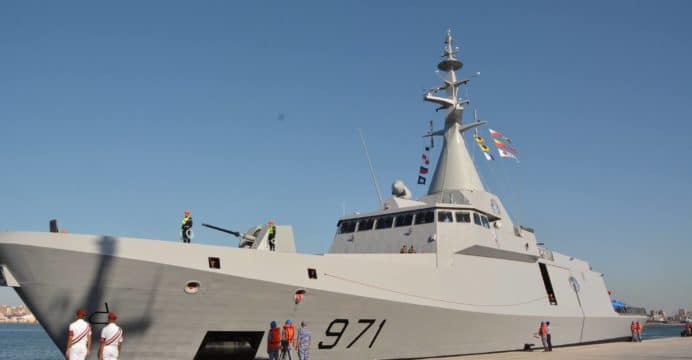 According to French President Emmanuel Macron (France 24, al-Arabiya), the United Arab Emirates (UAE) has signed a purchase for two Gowind 2500 corvettes from the French shipbuilder DCNS. UAE also has the option to acquire an additional two vessels.

This would be DCNS’ third order for the Gowind-series, following Egypt (four Gowind 2500) and Malaysia (up to six Gowind 2500-based Littoral Combat Ship). Displacing around 2,500 tons, the Gowind 2500-series is a multi-mission platform capable of anti-ship warfare (AShW), anti-submarine warfare (ASW) and short-to-medium-range anti-air warfare (AAW) operations.

The inclusion of the Gowind 2500 would amount to a potent hi/lo combination with the Baynunah-class, itself a relatively potent and well-armed vessel. The technical details of UAE’s Gowind order are not yet known, but it could mirror the Baynunah program by equipping the Gowind 2500s with both MBDA and Raytheon munitions, specifically the Exocet MM40 Block-III AShM and RIM-162C ESSM, respectively. The UAE Navy had already spent in the logistics and training cost of each, it would make sense to expand that to include the Gowind 2500 (resulting in a common munitions inventory).