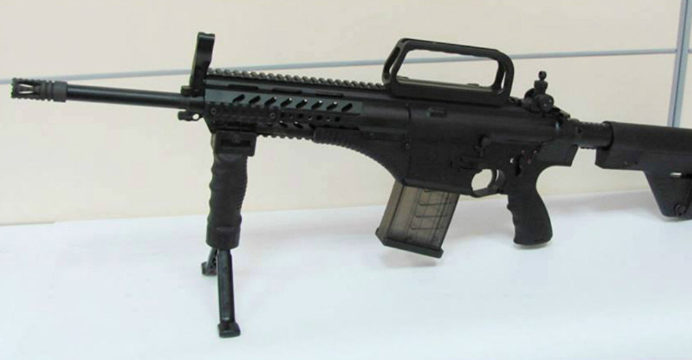 Turkey’s state-owned company Mechanical and Chemical Industry Corporation (MKEK) announced that it has registered its first overseas sales for the MPT-76 assault rifle.Anadolu Agency reports that 450 MPT-76 rifles were delivered to Somalia, while the Turkish Republic of North Cyprus ordered 2,500 rifles.

The Turkish Armed Forces inducted the MPT-76 in January. Turkey’s Undersecretariat of Defence Industries (SSM) issued its launch order of 15,014 MPT-76 rifles for $18 million U.S. in December 2015. Besides MKEK, the Turkish companies Kalekalip and Sarsilmaz will also produce the rifle.

Chambered for 7.62×51 mm, the MPT-76 will replace Turkish Army’s Heckler & Koch (HK) G-3 battle rifles. The MPT-76 is also a piece of Turkey’s efforts to indigenize its supply of armaments. Turkish officials describe the MPT-76 as being ‘effective as the G-3, as reliable as the AK-47 and as practical as the M-16.’ It has a range of up to 600 m and can fire 600 rounds per minute at a muzzle velocity of 800 m per second.

The MPT-76 is derived from the popular AR-15 platform, which has spurred the development of several other assault rifle models, such as the Caracal CAR-817AR, Ukroboronprom M4-WAC-47 and the venerable HK-416 from the United Arab Emirates, Ukraine and Germany, respectively. Firearm makers have managed to chamber the platform for 7.62×51 mm, 5.56×45 mm and 7.62×39 mm.

In 2016, MKEK had also marketed the MPT-76 to Pakistan for the latter’s assault rifle evaluation program. The Deputy Undersecretary of the SSM Mustafa Şeker told MSI Turkish Defence Review that MKEK sent 200 pre-production rifles (from Turkish Army stocks) to Pakistan, where they were put through summer and winter tests. The MPT-76 had several critical issues during its summer trials, which MKEK promised to correct with its serial production version.