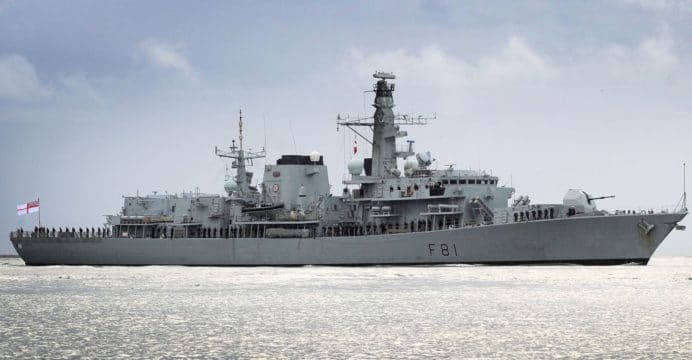 The U.K. could put Royal Navy Type 23 frigates for sale

The U.K. is reportedly considering of putting up to five Royal Navy Duke-class Type 23 frigates on sale.

The Ministry of Defence (MoD) denied that it would let the Royal Navy’s frigate fleet drop below 13 ships, but officials told The Times the option was being considered, mainly to control operational costs.

As per IHS Jane’s Navy International, officials had engaged Brazilian and Chilean officials, indicating that the first two could be available in early 2018, with an additional three by 2023. Jane’s reported that the landing platform dock (LPD) ships HMS Albion and HMS Bulwark may also be on sale.

The Type 23 was introduced in 1987 as a mainstay frigate, replacing the Type 21 and the Leander-class.

Besides incorporating anti-ship warfare (AShW) and anti-submarine warfare (ASW) capabilities, the Type 23 was also fitted with short-range anti-air warfare (AAW) systems in the form of Sea Wolf, which is deployable through a 32-cell vertical-launch system (VLS).

The U.K.’s long-term objective is to supplant the Type 23 with the Type 31e, which it also intends to pitch as an affordable frigate to the overseas market. The Type 31e has a price ceiling of £250 million per ship.

Two partnerships have been formed to bid for the Type 31e: BAE Systems with Cammell Laird and Babcock with BMT. Under the National Shipbuilding Strategy (NSbS), the U.K. aims to have the Type 31e produced under a distributed supply model whereby different parts of the ship are manufactured at different sites before undergoing final assembly. Naval and commercial shipyards alike are to compete for contracts.