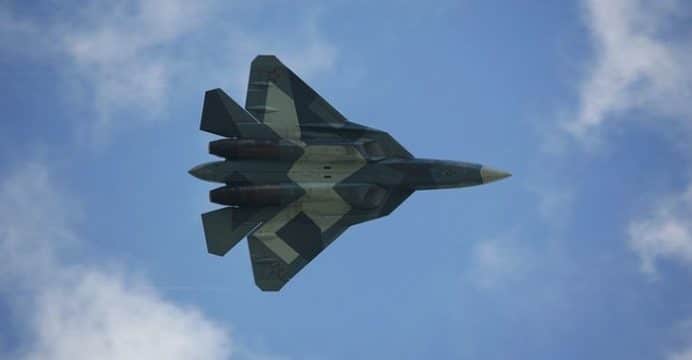 The Indian Air Force (IAF) is reportedly urging New Delhi to withdraw from the PAK-FA – also designated Su-57 and Fifth Generation Fighter Aircraft (FGFA) – next-generation fighter program, which is being developed in collaboration between Hindustan Aeronautics Limited (HAL) and Sukhoi.

A senior IAF official told Defense News that the “IAF is not keen to continue with the program.” Some of the IAF’s concerns with the PAK-FA reportedly include insufficient reduction in radar cross-section (RCS), especially in comparison to the Lockheed Martin F-35 Lightning II.

The PAK-FA is a collaborative effort between Russia’s various design bureaus, but spearheaded by Sukhoi, which saw relatively strong export success with its Su-30 Flanker-line in the 1990s and 2000s.

India was envisaged as the launch overseas customer of the PAK-FA/FGFA. However, the development of the PAK-FA has been tumultuous, namely in regards to Russia’s ability to demonstrate that it can produce the requisite technologies for 5th-generation fighters, such as electronic subsystems.

In July, IHS Jane’s reported that the Russian Aerospace Force (VKS) itself was uninterested in inducting the Su-57. The VKS is reportedly satisfied with the Su-35 Flanker-E.[1] Furthermore, the IAF had received limited assurance from United Aircraft Corporation (UAC) in regards to requested design changes.[2]

There were also concerns regarding the PAK-FA’s next-generation turbofan engine, Project 30, which is to be 30% lighter than the AL-41F1 and more fuel efficient. Currently, the PAK-FA prototypes are flying with the AL-41F1. It is unclear when Project 30 will come to fruition.

The IAF could still be reeling from the unsatisfactory availability rate of its Su-30MKI fleet in the early-to-mid 2010s. Issues with the Su-30MKI’s powerplant and insufficient in-house maintenance, repair and overhaul (MRO) capabilities, mainly due to insufficient access to timely spare parts from Russia, had caused the IAF Su-30MKI fleet’s operational availability rate to drop to less than 60% in 2015.

Though the two sides principally agreed to transfer the production of Su-30MKI spare parts to India, there have been snags in the implementation of the agreement. The Indian Ministry of Defence stated that UAC was reluctant to transfer the requisite technology to India’s private sector (Defense News).

HAL is confident that the FGFA will succeed, arguing that the depth of technology-transfer being offered to India under the PAK-FA is not available elsewhere.

“We are still hopeful. It is an opportunity for the industry as well as for the country. This is an opportunity for us to go in for this kind of (high) technology which has not been offered to us by any other country,” said HAL Chairman and Managing Director T Suvarna Raju to the Economic Times.

The IAF Vice Chief of Air Staff Air Marshal Shirish Baban Deo echoed the HAL Chairman’s sentiments, stating “When it comes to technology transfer, Russia really offers everything they have from the heart without any strings attached.”

India’s pursuit of an original 5th-generation fighter will be a long-term endeavour, even if India continues with the FGFA/PAK-FA. There an expedient avenue in requesting the F-35 from the U.S., though this will likely bar India from immediately accessing the Lightning II’s technologies. However, the F-35 would offer that substantive qualitative gain and next-generation airpower capability sooner than the FGFA. India can also look at tying the F-35 to technical support to the Advanced Medium Combat Aircraft (AMCA).

The other aspect to consider is the Rafale. In August, the IAF reportedly pushed for an additional 36 Rafales to augment the 36 currently on order. If the Su-30MKI fleet’s efficacy is in question (due to supply channel challenges with Russia), then it could be prudent to expand the Rafale fleet and fully capitalize upon its forthcoming qualitative gains, such as its long-range AESA radar, long-range air-to-air, stand-off strike capabilities and 75%+ guaranteed (by Dassault) operational rate. This can be had sooner than the FGFA.

It should be noted that the PAK-FA falling through does not necessitate an end to joint Indo-Russian work on a next-generation fighter. The IAF’s concerns could be simply be in regards to the PAK-FA specifically, though it is possible that Russian design and development assistance can still be sought for a new design. Both HAL and the IAF are of the view that in terms of next-generation technology development, India will not access more elsewhere than it would in Russia.