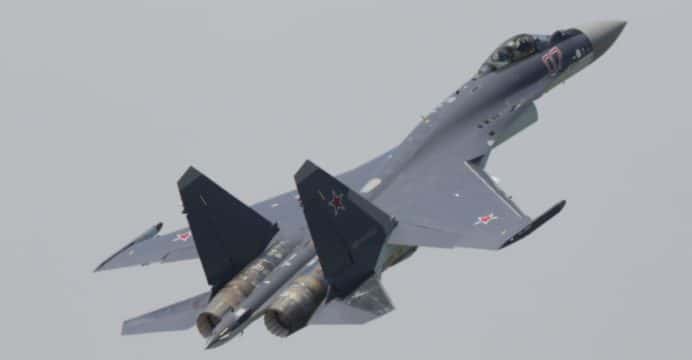 The Russian News Agency TASS reports (citing an unnamed source) that the United Arab Emirates (UAE) is planning to sign a contract for “over a squadron” of Sukhoi Su-35 Flanker-E multi-role fighters from the United Aircraft Corporation (UAC) in 2017.

“They want a lot, over a squadron but the exact number will be specified in the course of negotiations that may be held in November during an air show in Dubai,” said a source speaking to TASS.

In April, the Russian Minister of Industry and Trade Denis Manturov reportedly stated that the UAE was engaging Russia for “several dozen” Su-35s. Manturov was quoted saying that the UAE received technical documentation and information for assessing the Su-35.

The Su-35 is the latest version of the Su-27-based Flanker. The twin-engine fighter is powered by two 117S turbofan engines, which Sukhoi claims are a substantial improvement in thrust and efficiency to the AL-31F. The Su-35’s electronics suite is centered on the Irbis-E passive electronically-scanned array radar.

As per Sukhoi, the Irbis-E can detect 3m2 RCS (radar cross-section) targets at up to 400 km. The Su-35 has a maximum payload of 8,000 kg, which is deliverable through 12 external hardpoints.

Emirati interest in the Su-35 has not been confirmed officially, but at the International Defence Exhibition and Conference (IDEX), which took place in February, the UAE signed a cooperation agreement with UAC to collaborate on the development of a lightweight next-generation fighter (the project is different from PAK-FA).Thus, the UAE is – or at least was – officially engaged with Russia on combat aircraft programs.

If the Su-35 news is accurate and/or the next-generation fighter program initiated, it would underscore a clear variance from the regional – specifically Gulf Cooperation Council (GCC) – trends in airpower growth. Saudi Arabia, Qatar, Kuwait, Oman and Bahrain have invested in U.S. and European platforms, while the UAE could potentially be looking at staking a part of its development on Eastern systems.