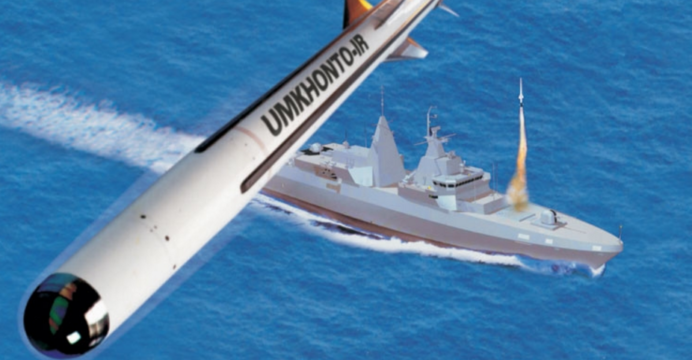 Quwa will begin publishing articles overviewing defence vendors’ complete solutions, such as short-range air defence (SHORAD). These reports will comprise of coverage of standalone systems serving as pieces to those overarching solutions. However, the coverage will not be confined to systems exclusive to the main vendor, but will include systems from other companies provided they are marketed by the main vendor or messaged by the contributing vendor. For example, the following report on Denel’s air defence solutions will touch upon Saab’s Giraffe radars, reflecting Denel’s partnership with Saab wherein the former’s Umkhonto system is being offered with the latter’s Giraffe AMB radar. Where possible, Quwa will outline publicly available technical data, cost and pricing information and performance results from end-users or prospective end-users. 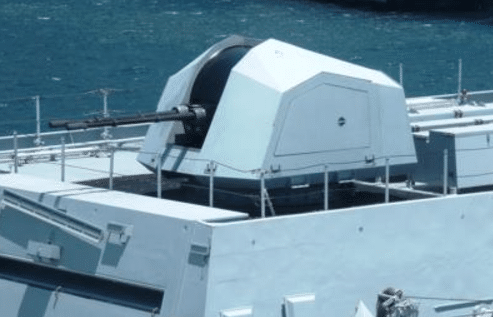 Thus far, the DPG has been deployed with the South African Navy (SAN) onboard its Valour-class (MEKO A-200SAN) frigates. The DPG is intended for providing defensibility against oncoming missiles, low-flying aircraft and nearby surface targets. It can form the very short-range air defence (VSHORAD) layer at sea.

The DPG consists of two Denel GA35 guns, which are enclosed in a turret designed to exhibit a low radar cross-section (RCS). The GA35 is a gas-operated gun fed with an ammunition belt in open breech position.[1] According to Defence Web, the DPG can fire 1,100 rounds per minute with a muzzle velocity of 1,175 meters per second.[2] The DPG can reach aerial and ground targets at 4,000 m and 6,000 m, respectively.[3]

To function, the DGP is integrated into the ship’s combat management system (CMS). For precision target-engagement, the DGP is guided by an electro-optical (EO) tracker.[4] Potential options can include the Reutech RTS 3200 Frequency Modulated Continuous Wave (FMCW) Optronics Radar Tracker (FORT).[5] Reutech is marketing the RTS 3200 as a “cost-effective higher performance alternative to conventional [EO] trackers which exhibit limitations under adverse weather conditions … [and] obsolete conventional [EO] radar trackers aboard naval vessels.”[6]

In tests onboard the Valour-class SAS Spioenkop, the RTS 3200 was “fully integrated” with the ship’s CMS, inertial navigation system (INS) and “guns.”[7] According to Reutech, the RTS 3200 “surpassed performance specifications in terms of detection range, tracking accuracy and target acquisition times … under varying sea state and weather conditions.”[8] Like analogous systems, the RTS 3200 – or other EO trackers – can be paired with a search and tracking radar (e.g. the Oerlikon Skyshield uses an X-band radar[9]).

For intercepting oncoming missiles, the DPG is compatible with Advanced Hit Efficiency and Destruction (AHEAD) rounds, which are airburst ammunition rounds.[10] In tandem, Denel also developed a Closed Loop Fire Correction system to fully track fired rounds and allow the fire control system (FCS) to issue real-time corrections (e.g. from meteorological/weather conditions).[11] The DGP can intercept cruise missiles, such as sea-skimming anti-ship missiles, at a range of up to 2,500 m.[12] For “high-speed” missiles (unclear if this refers to supersonic cruising missiles), the DGP can intercept at 1,500 m.[13]

To control cost, the DPG utilizes commercially-available off-the-shelf (COTS) components. The DPG turret for ships is a non-deck-penetrating design, allowing for relatively easier installation and repair work.[14] The disassembly and assembly of the DPG do not require special tools. It is not known if Denel Land Systems will proceed to develop or offer a land-based variant analogous to the Skyshield or Aselsan Korkut, the latter being a self-propelled anti-air gun (SPAAG) system. 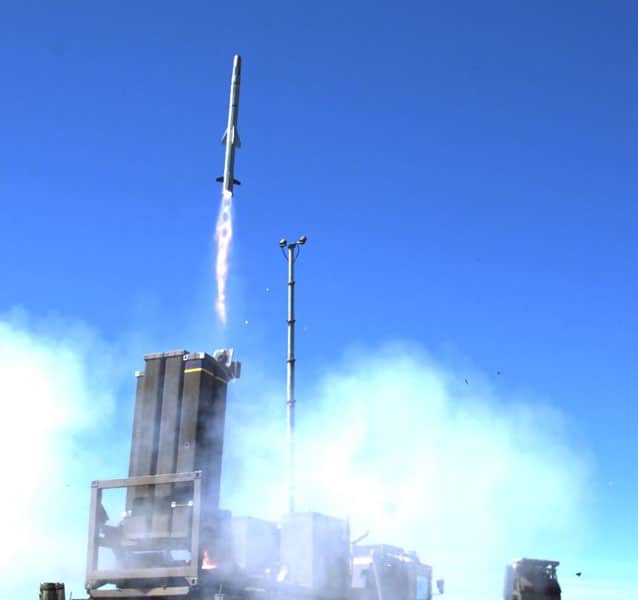 The Denel Dynamics Umkhonto is a surface-to-air missile (SAM) platform that is deployable from land and sea. The vertically-launched missile uses a radar-fed INS guidance system complemented by a terminal-stage passive infrared (IR) seeker, providing the Umkhonto a measure of fire-and-forget capability. The Umkhonto entered service in 2001. Besides South Africa, the Umkhonto is in use with Finland and Algeria.

Denel markets the Umkhonto as a “high-velocity and infrared homing, providing all-round defence against simultaneous attacks from missiles and aircrafts.”[15] In its current iteration, the Umkhonto has a maximum intercept range of 20,000 m and maximum altitude of 8,000 m.[16] The Umkhonto has a launch mass of 135 kg, which includes a 23-kg warhead.[17] It has a top speed of Mach 2.[18] Denel claims that the Umkhonto can also be used to strike surface targets, making it a unique solution compared to competing SAM systems.[19] The Umkhonto is deployable through vertical launch system (VLS) cells.

Thus far, Denel has integrated the Umkhonto to function with two radar platforms. For the SAN’s Valour-class frigate, the Umkhonto has been paired to the Thales MRR-3D.[20] The Thales MRR-3D-NG has an instrumented range of 180 km, while also being capable of tracking fighter aircraft-sized and small targets at 125 km and 40 km, respectively.[21] The Algerian Navy’s MEKO A-200AN is configured with the Saab Sea Giraffe AMB.[22] In September 2016, Denel Group and Saab had announced a partnership wherein the two will offer the Umkhonto and Giraffe as an integrated air defence solution.[23]

The Saab Giraffe has three different products, i.e. the Giraffe AMB passive phased-array radar as well as Giraffe 1X and Giraffe 4A active electronically-scanned array (AESA) radars. Seeing that the Umkhonto has already been integrated to the Sea Giraffe AMB, it is likely the Umkhonto ground-based air defence system (GBADS) will be offered with the Giraffe AMB. The Giraffe AMB has an instrumented range of 120 km.[24] 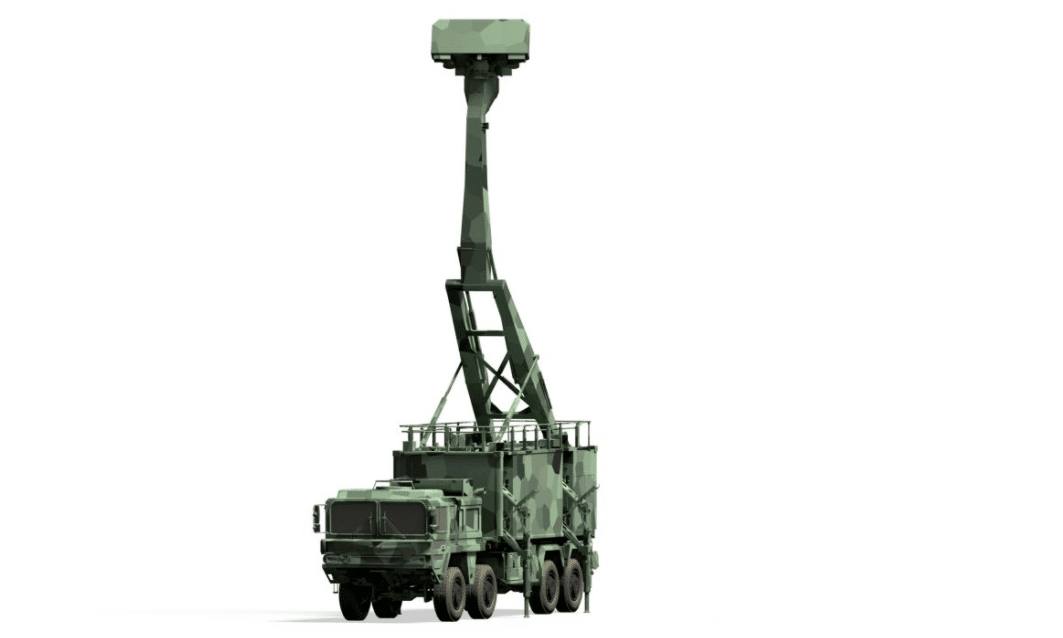 South Africa’s Reutech is also offering a target acquisition radar for the Umkhonto. The RSR320 Dual-Band Radar (DBR) XL is envisaged to be tailored specifically for the Umkhonto SAM.[25] The radar’s development has been frozen.[26] The DBR XL has detection range of 80 km and target acquisition range of 40 km.[27] It is an L-band solid-state system.[28] Despite the Denel-Saab partnership in place, Reutech had announced that the DBR XL was drawing overseas interest.[29]

Like the DPG, Denel positions the Umkhonto as a cost-effective and readily applicable air defence solution. In terms of cost, the integration of the Umkhonto to two MEKO A-200ANs along with 100 Umkhonto SAMs cost Algeria $61 million U.S.[30] Besides frigates, the Umkhonto was also fitted to the Finnish Navy’s Hamina-class fast attack crafts (FAC), demonstrating that the Umkhonto can be integrated to a diverse range of surface combatants. The Umkhonto GBADS can be deployed as a mobile SAM solution using an 8×8 utility track for the firing unit and a second vehicle for carrying the radar and command-and-control (C2) suite.

The Umkhonto and DPG can be paired to form a comprehensive short-range air defence (SHORAD) layer, especially at sea (where they have been applied as such onboard the SAN’s Valour-class frigates). The DPG – specifically the GA35 guns – can potentially be developed into a land-based AAG or SPAAG (if mounted), which can spur a deployable SHORAD and VSHORAD solution.

The Denel Umkhonto EIR [Extended Infrared] is envisaged to be a medium-range version of the SAM. With the incorporation of a new dual-pulse rocket motor[31] and nose cone[32], the Umkhonto EIR was to have a range of 30-35 km.[33] The Umkhonto EIR would retain the Umkhonto IR’s passive IR seeker and data-linked INS guidance suite. Denel had exhibited the Umkhonto EIR in February 2017 at the International Defence Exhibition and Conference (IDEX) in Abu Dhabi, the United Arab Emirates.[34] In 2014, Denel had announced that it would also develop an active radar-guided Umkhonto LR with a range of 60 km.[35]

Denel is also collaborating with Rheinmetall to develop the Cheetah counter-rocket, artillery and mortar (C-RAM). It will have a range of 6 km and is aimed at rectifying apparent deficiencies in current air defence systems in being able to intercept small projectiles.[36] The Cheetah will utilize a radar-seeker and proximity warhead. It will be deployable through a 60-cell VLS.[37] Denel and Rheinmetall envisage the Cheetah as a low-cost complement to the Oerlikon Skyshield AAG system.

Most programs in Denel Group’s development pipeline are supported with minimal, if not deficient, local research and development funding. Thus, the viability of these future programs is largely contingent on an overseas buyer investing as a means to bring them to fruition. To compensate, Denel Group is receptive of a prospective buyer’s co-production and/or transfer-of-technology requests (seeing that the buyer is also a co-owner of the program). Examples include the A-Darter air-to-air missile and Umbani precision-guided bomb kit.