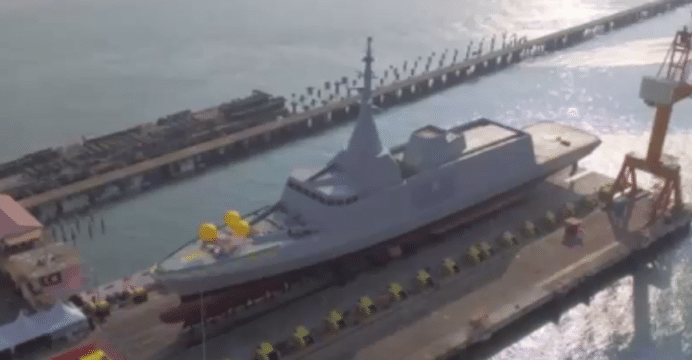 The KD Maharaja Lela is the first of six LCS ships ordered by Kuala Lumpur from BNS, which was awarded a $2.1 billion U.S. contract in July 2014 to construct the ships. BNS began constructing the lead ship the KD Maharaja Lela in March 2016. It is scheduled to enter service in 2019.

The Maharaja Lela-class LCS was derived from the DCNS Gowind 2500 corvette, which lends the LCS its low infrared and magnetic detectability and radar cross-section (RCS) hull.

“With the LCS vessels, I hope the RMN’s ability to protect the country’s sovereignty will be greatly boosted, especially when it comes to facing the Islamic State threats,” Hussein told local media at the event.

The LCS has a length of 111 m and displacement of 3,000 tons. It is manned by 118 crewmembers and support a medium-weight naval helicopter, such as the Westland Lynx in service with the RMN.

In parallel to the LCS, the RN is also procuring four Littoral Mission Ships (LMS) from China to support its long-term “15-to-5” modernization plan, which aims to reduce the number of ship types the RMN uses to five in order to reduce logistics costs and increase efficiency.