Pakistan and the Czech Republic to explore for growth in defence ties
January 18, 2020 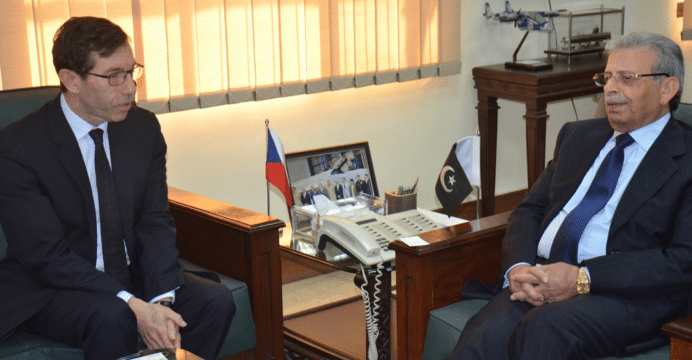 On July 19, the Czech Republic’s Ambassador to Pakistan Jon Fury had met with Pakistan’s Minister of Defence Production (MoDP) Rana Tanveer Hussain. Mr. Fury invited the MoDP for an official visit to the Czech Republic and had discussed the state of bilateral defence ties between the countries.

In a statement released by Pakistan’s Public Information Department (PID), the meeting saw the MoDP reiterate Pakistan’s interest in collaborating with the Czech defence industry. The MoDP acknowledged that both countries “had greater potential in … defence production [that] needed to be explored.”

The Ambassador promoted the Czech Republic’s defence industry and its competencies to the MoDP. He also reiterated the mechanisms available in the memorandum-of-understanding (MoU) signed in 2010 for enhancing bilateral defence relations.

The Czech defence industry has several areas of interest in Pakistan, most recently the opportunity to fulfill the Pakistan Army’s requirement for new assault rifles. In 2016, the Pakistan Army had solicited for assault rifle samples from numerous Western manufacturers, among them Česká zbrojovka (CZ).

CZ submitted its CZ-807 modular assault rifle, which can be chambered for either 7.62×39 mm or 5.56×45 mm NATO rounds. In November, CZ had signed a letter-of-understanding (LoU) with Pakistan Ordanance Factories (POF) to “intensively negotiate [the] delivery of complete technology for the production of small arms to [POF].” In April, CZ held a marketing demonstration in Quetta, Baluchistan showcasing the CZ-807 and its other products, such as the Scorpion EVO 3 sub-machine gun. If an assault rifle deal for service-wide adoption is inked, it would be the largest Czech defence program in Pakistan to-date.

The Czech turbine manufacturer PBS Velká Bíteš also has interests in Pakistan. In 2016, PBS exported its TJ100 miniature turbojet engine to Pakistan’s National Engineering & Scientific Commission (NESCOM), where it is used to power unmanned aerial vehicles (UAV), such as target drones. The TJ100 has a thrust-output of 1.25 kN. There is scope for growth as Pakistan may express interest in other PBS products, such as the 140 kW TP100 turboprop engine, which can power a medium-altitude long-endurance (MALE) UAV in the class of the Anka and CH-4B, which is among the possible MALE UAV forms under development in Pakistan Aeronautical Complex’s (PAC) newly established Aviation Design Institute (AvDI).

Denel Land Systems and Nexter use Tatra Trucks T815 8×8 trucks as platforms for their 155 mm/52-calibre self-propelled howitzers (SPH), the T5-52 and CAESAR, respectively. The Denel T5-52 is among the SPH systems to have been evaluated by the Pakistan Army for a large SPH requirement. Besides SPHs, Tatra could also position its products to Pakistan as platform solutions for multiple-launch rocket systems, logistics, mobile command and control suites, mobile radars and/or surface-to-air missile systems.

Aero Vodochody could consider exploring the Pakistan Air Force’s (PAF) requirements. However, it is less likely to see success than vendors involved in land or small aerial platforms. For example, the PAF has not been enthusiastic about lead-in fighter-trainers (LIFT), viewing them as too costly and overly-equipped for fighter conversion training. In May, aviation journalist Alan Warnes reported that the PAF leadership will use FT-7 and F-7Ps in the conversion role instead of new platforms. The L-39NG effectively overlaps with the K-8 Karakoram. For the PAF to consider the recently revived L-159 trainer, Aero Vodochody would need to offer a simplified and lower cost variant (i.e. without the current radar and avionics suite).

That said, Aero Vodochody could potentially be viewed as among those companies the PAF could engage for support in the Kamra Aviation City initiative. Aero Vodochody’s experience in forging supplier linkages, participating in multi-national aviation programs (e.g. Embraer KC-390) and aerostructure manufacturing could be of interest to the PAF. Aero Vodochody could emulate Turkish Aerospace Industries’ strategy of attaching offsets and local workshare to the T129 by offering a similar package with the L-159. This could include local workshare, parts production for third-party sales and investment in Kamra Aviation City.

Although the potential for off-the-shelf acquisitions is apparent, the two countries could attempt to pair specific agencies and companies for research and development and joint-production. Synergies may exist between NESCOM (and AvDI) and PBS in drone and munitions; the National Radio & Telecommunications Corporation (NRTC) and MESIT in radios; Shibli Electronics (a private company) and Meopta in optics for small-arms; and others. Collaboration can spur the development of new and mutually beneficial products.