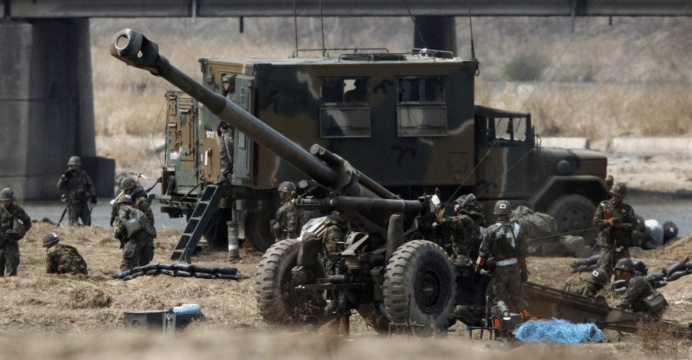 The Hanwha Corporation is also partnering with India’s Larsen & Toubro to jointly manufacture and supply K9 Vajra-T self-propelled howitzers to the Indian Army. The Vajra-T is derived from the Hanwha Techwin K9 Thunder. Turkey manufactures a variant of the Hanwha K9 in the form of the T-155 Firtina.

Considering the small quantities acquired, the Pakistan Army is likely trialing these weapons. However, it is not known if there are active bids for towed howitzers and/or AGLs.

Pakistan had examined towed howitzer guns in the mid-2000s, such as the Turkish Mechanical and Chemical Industry Corporation (MKEK) Panter, which it bought in very limited quantities. However, it did not issue follow-up orders. Currently, the M198 is Pakistan’s primary 155mm towed howitzer.

If Pakistan is examining the prospect of inducting SPH and towed howitzers concurrently, then an option may be to consider standardizing the gun. Re-using the SPH’s gun as a towed 155mm/52-calibre gun would help scale the logistics, maintenance and defence production (i.e. transfer-of-technology) costs. Pakistan can then focus on arming its howitzer units with guided and velocity enhanced artillery shells.

Moreover, Pakistan has not signalled an intent to acquire lightweight howitzers for use in the Northern Areas and Kashmir. Not only would such howitzers provide high-impact firepower, they could be ferried using mainstay aviation assets, such as the Mil Mi-171 transport helicopter.

While the BAE Systems M777 is unlikely to be an option, China’s NORINCO has an analogous system in the AH4. Alternatively, Pakistan could consider the Denel’s G7 Lightweight Experimental Ordnance (LEO) platform, a 105mm gun with the range and terminal performance of a 155mm system. In contrast to the near 7,000-kg KH179, the Denel G7 and NORINCO AH4 weigh 3,800 kg and 4,500 kg, respectively. The Mi-17 can carry up to 5,000 kg in payload with its external sling.

In terms of the 40mm AGL, if there is an active requirement, Hanwha Corporation will compete with Daudsons Armoury (DSA), which had displayed its own AGL during Pakistan’s biennial defence exhibition, IDEAS 2016. According to DSA (in November), the DSA AGL 40 was undergoing trials with the armed forces.

Pakistan would likely deploy AGLs in a manner similar to that of other countries, such as mounting it on a vehicle (such as the Light Armoured Vehicle Assault or LAVA platform) or by infantry. In 2016, the Pakistan Army explored various avenues of modernizing its small arms arsenal, from the evaluation of new assault rifles to acquiring the Alcotán-100 anti-tank rocket system.