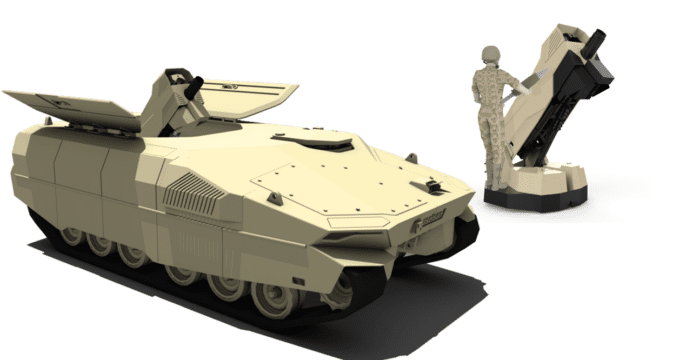 As per Aselsan (via MSI Turkish Defence Review), the AHS-120 is compatible with any mortar shell. It can function a turret for self-propelled mortar carriers and as a stand-alone fixed installation.

The principal aim of the AHS-120 is to transform the process of firing mortar shells into an automated procedure, one resulting in increased efficiency, safety and effectiveness.

To achieve these goals, Aselsan incorporated the AHS-120 with an automatic ammunition loading system, a fire control system, and barrel guidance system. When applied as a self-propelled system, the AHS-120’s carrying platform is equipped with an inertial navigation system and battlefield management system.

The system enables AHS-120-based mortar carrier crew to monitor the area to identify routes and confirm friendlies as well as (potentially) receive target information from forward observers. With these systems, the AHS-120 enables its users to effectively function in a network-enabled environment.

Using Aselsan’s own backlash mechanism, the AHS-120 was developed to be compatible (as a turret) with a large variety of vehicles, providing countries in need of a self-propelled mortar system a modular system.

The AHS-120 appears to carry over the additions – such as automated shell loading and digital fire-control systems (FCS) – provided to artillery systems. It appears that location information from forward observers can be paired to the AHS-120’s FCS, enabling for quicker and more accurate mortar fire as well as swifter reactivity to potential counterfire. The Turkish industry has not disclosed plans for guided mortar shells, though the AHS-120 does set the basis for one thanks to its FCS.

With the AHS-120, Aselsan has a burgeoning land operations portfolio, one comprising of very short-range anti-air warfare systems, remote weapon stations, secure communications systems and weapon-locating radars. These have interoperable value. For example, the Aselsan counter-mortar radar provides weapon-locating capabilities – this information can flow via Aselsan’s secure radio communications systems to inform AHS-120 and other units, enabling them to react appropriately.

Pakistan could be one of Aselsan’s target markets for the AHS-120. Pakistan is one of Aselsan’s customers, it has ordered software-defined radios (which are produced under license in Pakistan), electronic support measures systems and targeting pods. Pakistan’s al-Khalid 2 main battle tank program is also of interest to Aselsan, which is marketing its fire control systems, sights and remote weapons stations for the tank.

In June 2016, IHS Jane’s forecasted that Pakistan could potentially spend up to $1.5 billion U.S. on self-propelled mortar systems from 2016 to 2024. Being a modular and platform-agnostic solution, the AHS-120 provides the Pakistan Army with the option implement its mortar carrier program using multiple vehicle types, so as to have solutions tailored for different terrains and environments.