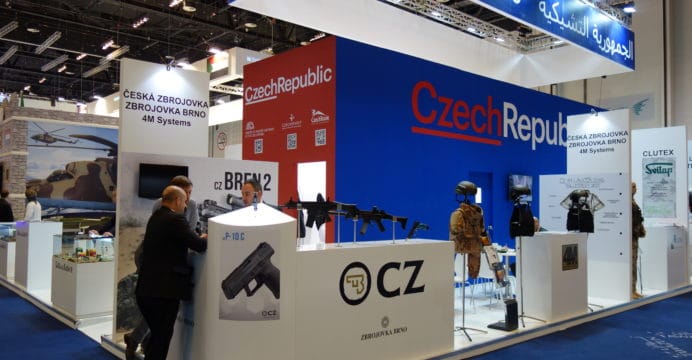 The Czech firearms designer and manufacturer Česká zbrojovka (CZ) made a concerted marketing push for the Middle East market during the 2017 International Defence Exhibition and Conference (IDEX), which took in Abu Dhabi in February.

In its news release, CZ states that it showcased its CZ-806 BREN 2 modular assault rifle, which can be chambered for 5.56×45 mm NATO and 7.62×39 mm rounds, and introduced the new CZ P-10C pistol with a linear striker. As per CZ, “both [products] enjoyed a lot of interest” from IDEX attendees, which included armed forces personnel from many countries. CZ also noted that it had “an important meeting” with Pakistan’s Minister of Defence Production (MoDP), Rana Tanveer Hussain.

Interestingly, a recent video emerged of CZ conducting an event showcasing the CZ-806 BREN (or CZ-807), Scorpion EVO 3, and P-series pistols in Baluchistan, Pakistan. Local law-enforcement and Pakistan Army officials were present at the event.

In November 2016, Pakistan Ordnance Factories (POF) and CZ signed a letter-of-understanding (LoU) to “intensively negotiate [the] delivery of complete technology for the production of small arms to [POF].” The LoU entailed the discussion transfer-of-technology, including the “gradual launching of production in Pakistan, ranging from light assembly to maximum localization.”

The LoU, which was just a commitment to negotiate (i.e. not an actual contract), was seen to be in regards to the Pakistan Army’s next-generation standard-issue assault/battle rifle program, which envisaged to gradually supplant the Army’s legacy Heckler & Koch (HK) G-3 battle rifles and Type 56 assault rifles. CZ had even displayed firing-test results from a 7.62×51 mm NATO version of the CZ-807 at IDEAS.

CZ’s meeting with the MoDP in IDEX is the latest known interaction between the two sides. It is not known if this agreement will be concluded, but CZ is still engaged with Pakistan.