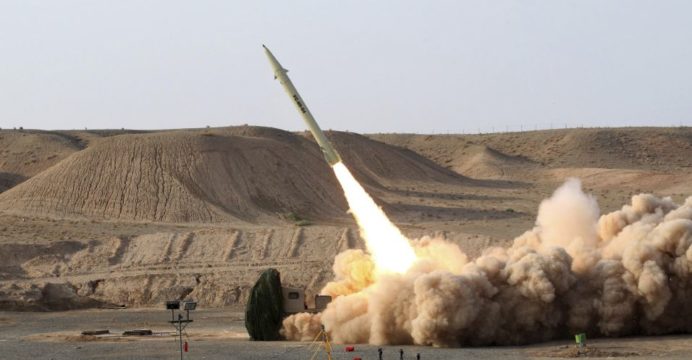 As per the Tasnim News Agency, the Hormuz-2 ASBM has a range of 300 km.

IHS Jane’s states that the Hormuz-2 is essentially the infrared-seeker tipped Khalij Fars ASBM, but with an active radar-homing (ARH) seeker instead of infrared.

Dr. Carlo Kopp of Air Power Australia described ASBMs as “a specialized class of ballistic missile with a Manoeuvring Re-entry Vehicle (MaRV/MARV), equipped with a terminal seeker to provide precision or accurate terminal guidance in the final phase of weapon flight.” The terminal-stage seeker is designed to be accurate enough to hit large warships, such as aircraft carriers.

ASBMs are anti-access and area denial weapons designed to deter enemies from staging naval operations in the user’s area(s) of interest. In Iran’s case, this would be its littoral waters.

Iran’s earlier ASBM, the infrared-tipped Khalij Fars, was revealed in 2011. Iranian officials claim that the Khalij Fars can carry a 650-kg warhead and is equipped with an ‘interception evading guidance system’ – alluding to MARV capability (which is not confirmed in the case of the Khalij Fars or Hormuz-series).

The Hormuz is a variant of the Khalij Fars, which itself is an advancement of the Fateh-110 tactical ballistic missile introduced in 2002.