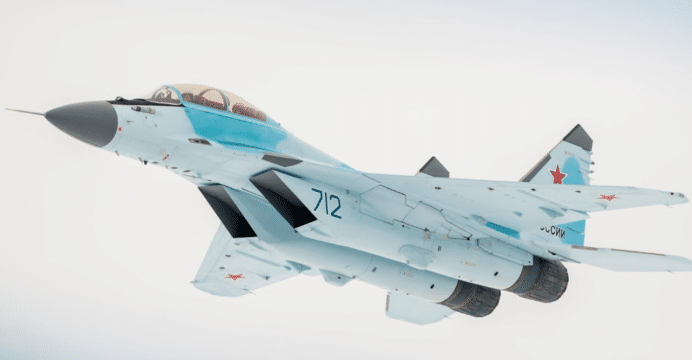 Tarasenko contended that the MiG-35 is a competitive platform in both cost and capability. While being able to deploy the same kinds of air-to-air and air-to-surface munitions as its contemporaries, the MiG-35 has a lower life-cycle cost (30-40%) and acquisition price (20%).

The MiG-35 is currently undergoing trials, which are to be concluded over the next two years. The Russian Aerospace Forces (VKS) had expressed interest in the MiG-35 as well.

The MiG-35 is UAC’s first exportable fighter with an active electronically-scanned array (AESA) radar. It is not known how far the MiG-35 will stray from the U.S. $45-50-million unit price of Egypt’s major Fulcrum contract from 2015-2016, which may be for the MiG-35 (unconfirmed). It appears that UAC is aiming to keep the MiG-35 close to that figure, so as to effectively compete against the Lockheed Martin F-16V and JAS-39E/F Gripen NG, which may be its closest competition on the market.

In terms of engagement, UAC’s short-term focus is likely to be on Bangladesh, which has an active tender for eight (with an option for four more) twin-engine multi-role fighters. Securing this tender could open the MiG Corporation to follow-on orders from Dhaka, providing secure long-term business activity.

Besides Bangladesh, the South American market is flush with cost-sensitive legacy fighter users. Peru already operates an older variant in the MiG-29SMT, which makes it – like other legacy MiG-29 users – one of UAC’s prime markets. While Argentina suspended its plans for a new fighter platform, potentially better economic and fiscal conditions in the future could restore it as a factor. Ecuador should also be a major candidate considering that it essentially operates vastly upgraded Dassault Mirage III variants in the Atlas Cheetah and Israel Aerospace Industries (IAI) Kfir. Venezuela is already an existing user of Russian fighter aircraft, so UAC should benefit from an existing relationship.

There is certainly a market for the MiG-35, but it will be incumbent for UAC and Moscow to compete on cost as well as deliver on reliability and scheduling. Cost-sensitive markets have limited flexibility in terms of assuming risk, and in the absence of financing plans (due to Moscow’s current economic difficulties), cash payments will certainly demand concessions on cost, delivery, quality-assurance, etc. Markets where UAC has active competitors, such as Saab, could be swayed to the costlier alternative if other elements, such as financing and supplier-credibility, are in place.