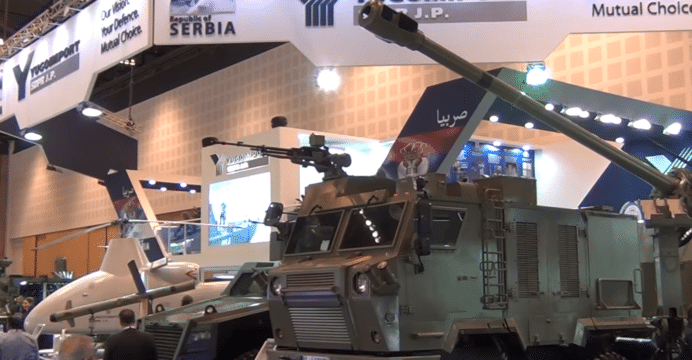 The NORA B-52 is competing against the Denel Land Systems T5-52 for the Pakistan Army’s requirement for wheeled SPHs. It had been tested in Pakistan, and a Pakistani Army delegation led by the Director General of Artillery visited Serbia in January.

As per the Serbian news publisher Politika, Yugoimport-SDPR revealed that Pakistan was interested in 500 systems, of which 400 would be manufactured in Pakistan under a transfer-of-technology agreement. The MoDP also inquired about the extended-range version of the 122 mm Grad-2000 rocket, which has a range of up to 52 km, which is deployable through multiple-launch rocket-systems (MRLS).

Pakistan has yet to decide between the NORA B-52 and T5-52, but the purported figure provides context into the scale of the Pakistan Army’s requirement. If hundreds of systems are sought, and that too with domestic manufacturing, then the selection of a wheeled-SPH could shape Pakistan’s wider artillery plans.

Since Pakistan would be manufacturing a 155 mm/52-caliber gun for the SPH, then it would be reasonable to assume that the same gun would be procured for the Army’s 155 mm towed howitzer needs.

The inquiry in the Grad-2000 also indicates that the Army has far-reaching artillery modernization plans. While Pakistan Ordnance Factories (POF) manufactures 122 mm rockets, the Pakistan Army’s needs have evolved to require extended-range and, potentially, precision-guided rockets.

The Serbian industry has many land forces solutions. Expanding its artillery portfolio, Yugoimport-SDPR showcased its new 400-mm diameter Sumadija artillery rocket, which can push a 200-kg warhead to a range of up to 280 km. The Sumadija appears to be similar in concept to the Israel Aerospace Industries Long Range Attack Missile (LORA), albeit with a lighter warhead (versus the LORA’s 570-kg warhead).

Yugoimport-SDPR’s mobility catalogue comprises of armoured vehicles such as the Lazar-series, which are 8×8 armoured fighting vehicles (AFV) with defensibility against mine and improvised explosive device (IED) blasts as well as ambushes. The improved Lazar-3 was displayed at IDEX. Yugoimport-SDPR expanded its vehicle portfolio with the 4×4 MILOSH armoured vehicle.