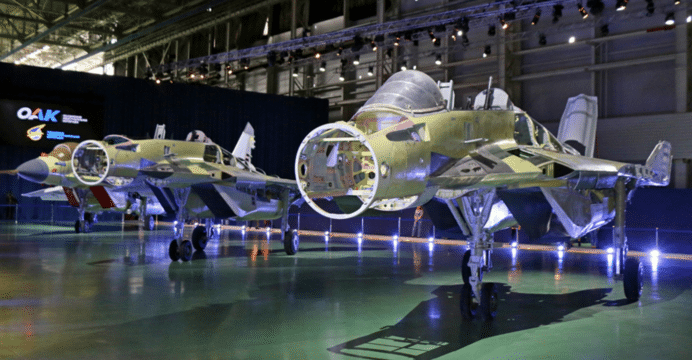 IDEX 2017: The UAE and Russia plan to co-develop a next-gen fighter

The United Arab Emirates and Russia’s United Aircraft Corporation (UAC) have agreed to collaborate on the development of a lightweight next-generation fighter.

The agreement was signed at the 2017 International Defence Exhibition and Conference (IDEX), which is taking place in Abu Dhabi in the United Arab Emirates.

Russia’s Minister of Industry and Trade Denis Manturov said (via the Russian News Agency TASS), “We’ve signed an agreement on industrial cooperation in the field of military engineering. This will enable us to push ahead with the fifth-generation-jet project, in which the UAE will participate.”

The program is in its preliminary stages, with the two sides have yet to decide on whether the new fighter would be single-engine or twin engine. However, UAC will be developing a fifth-generation design.

As per Sergei Chemezov, the chief executive officer of Rostec, the Russian industry group representing UAC, told local media (The National) that the two sides will commence work on the fighter in 2018.

This is a substantial step for the UAE defence industry. There is certainly a dearth in emerging fifth or next-generation fighter solutions on the market, with the Lockheed Martin F-35, Shenyang Aircraft Corporation FC-31, and UAC T-50 in late-stage form, and the Turkish Aerospace Industries (TAI) TFX and the Korea Aerospace Industries (KAI) KFX in early conceptual or design stages.

The Russian-Emirati fighter will likely emerge with the TFX and KFX, but it may be aiming to compete on the same cost and accessibility grounds as the SAC FC-31. It would be in the interests of both the UAE and Russia to expand the funding pool, thus the prospect of additional partners, potentially in North Africa and/or Central Asia, to share development costs and provide production scale is plausible.

Broadly, this could also mark a shift in the UAE’s defence planning. The UAE has yet to finalize an order for multi-role fighter aircraft to complement its Lockheed Martin F-16E/F Block-60 and Mirage 2000-9. It would be significant if the UAE is pursuing its program with Russia in lieu of imports from the United States or Western Europe. First, the shift would denote confidence to a bespoke development (instead of an off-the-shelf solution). Second, it would be a pivot away from Western platforms.

However, it could also be an effort on the UAE’s part to export aircraft, especially in markets that will have difficulty to access next-generation fighters from the West. This is a valid approach, but the lack of local scale could be an issue, though Russia could opt for it to complement the T-50.