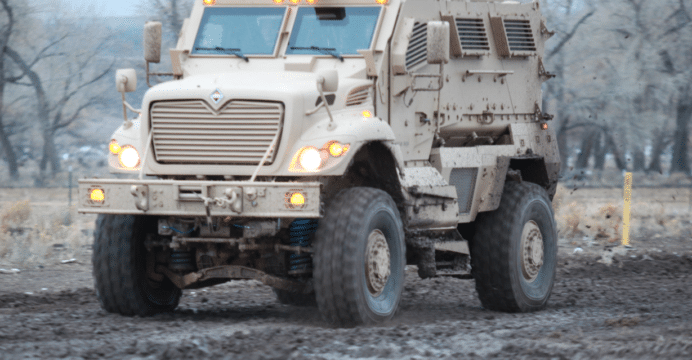 The MRAP program is scheduled for completion by October 2018.

Pakistan has been using MRAPs as part of its ongoing counterinsurgency (COIN) operations in the Federally Administered Tribal Areas (FATA). Pakistan had sought surplus MRAPs from U.S. stocks in Afghanistan under the Excess Defence Articles (EDA) program. These efforts did not materialize (certainly not at the scale of America’s EDA transfer of 762 MaxxPro MRAPs to Egypt).

In September 2014, the U.S. approved a US $198 million sale for 160 Navistar MaxxPro MRAPs, at least some of which have been ordered and delivered to Pakistan. It is not clear if this recent order is part of that original framework or a follow-on order.

Besides Navistar, other vendors are also involved in supplying MRAP or MRAP-like vehicles to Pakistan. The Turkish auto-manufacturer BMC is believed to have sold Kirpi MRAPs to Pakistan. The Kirpi benefits from STANAG-4569 Level-3 protection against small arms fire and STANAG 4569 Level-3B for defensibility against mines and IEDs under the chassis.

Apart from the defunct Heavy Industries Taxila (HIT) Burraq program, Pakistan has not pursued the local production of 4×4 MRAPs analogous to the MaxxPro Dash or Kirpi. It is possible that the Army does not perceive of a long-term need for MRAPs, especially in numbers sufficient to offset the cost of domestic manufacturing. In fact, even the Hamza AFV – which has MRAP-like qualities in regards to blast protection – is being marketed as a general-purpose vehicle, one that can even be used to carry a 105-mm gun turret.