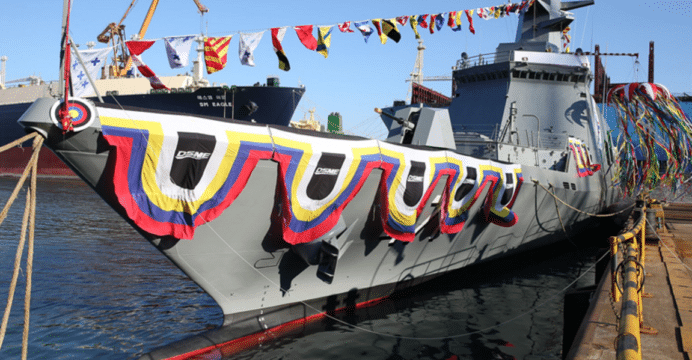 The launch ceremony was held at DSME’s shipyard on Geoje Island in South Korea and was attended by Thai and South Korean officials including, among others, RTN Commander-in-Chief Admiral Na Arreenich, Thailand’s ambassador to South Korea Sarun Charoensuwan, and the CEO of DSME Jung Sung Leep.

Thailand ordered the frigate in August 2013 in a USD $396-410 million contract. With a displacement of 3,650 tons, the frigate has a length of 122.5 metres, beam of 14.4 metres, and a crew of 136 personnel. Analysts note that the RTN frigate is derived from the Republic of Korea Navy’s (ROKN) KDX-1 destroyer.

The frigate will go through sea trials in South Korea and is expected to be delivered to the RTN in 2018.

The RTN frigate is a variant of DSME’s DW3000 platform. It is expected to be equipped with a 76 mm main gun, Phalanx close-in-weapon-system (CIWS), Harpoon anti-ship missiles (AShM), Saab Sea Giraffe radar, and Atlas Electronic towed array sonar. In the lead-up to the order, the RTN was thought to have been seeking two or three new frigates as part of its fleet modernization program.

Besides new surface combatants, the RTN is also seeking new submarines, for which the Chinese S26T (a variant of the Type 041 Yuan) is viewed as the leading candidate. However, DSME also has diesel-electric submarines (SSK) on offer, such as the ThyssenKrupp Marine Systems Type 209/1400-derived DSME 1400 SSK which it is supplying to the Indonesian Navy.

Thailand is among several countries with experience operating Chinese and Western (largely American) naval solutions. Interestingly, the RTN’s Type 025T frigates, which are variants of the Chinese Type 053 (co-designed with the RTN), are configured with a diverse array of subsystems. For example, it uses the Saab Sea Giraffe AMB 3D and Thales LW08 radars in conjunction with the RIM-162 Evolved Sea Sparrow (ESSM), which itself is deployed using the Mk.41 vertical launch system (VLS).