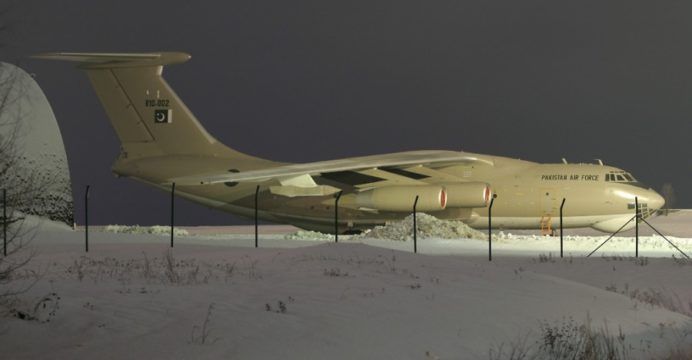 A photo of a Pakistan Air Force (PAF) Ilyushin IL-78 in-flight re-fueling tanker seemingly at the 360th Aircraft Repair Plant in Ryazan indicates that Russia will be refurbishing the PAF’s IL-78s.

In a post written by a Russian aviation observer, the 360th Aircraft Repair Plant will begin refurbishing the IL-78s in May, and will complete the process by December 2017.

The PAF procured its four IL-78s from Ukrainian surplus stocks in the mid-to-late 2000s. The first IL-78 was delivered to the PAF in December 2009.

The PAF sought refuelling aircraft to extend the endurance and range of its light-weight fighter aircraft. The PAF likely preferred a tanker capable of both boom and hose-and-drogue refuelling (to support the F-16 as well as Mirage ROSE and JF-17), it was unable to secure an affordable platform to fulfill the role.

Although the IL-78s were bought cheaply, questions have been posed to the platform’s efficiency (in light of its noise and fuel-consumption issues). Refurbishment in Russia will see the PAF’s IL-78s benefit from various airframe and engine repairs.

Interestingly, this is the first transaction between Russia and Pakistan that supports, albeit modestly, the latter’s conventional military capabilities. To the PAF, the IL-78s are tankers first and foremost, and are poised to be more prominent with the introduction of in-flight refuelling capable JF-17 Block-II fighters rolling out from Pakistan Aeronautical Complex (PAC) Kamra.

Pakistan also has four Mil Mi-35 attack helicopters on order from Russia. The USD $153 million deal is expected to come into fruition in 2017. Pakistan could procure a total of 20 Mi-35s. Pakistan was also reportedly interested in the Su-35 multi-role fighter and Mi-28NE attack helicopter.