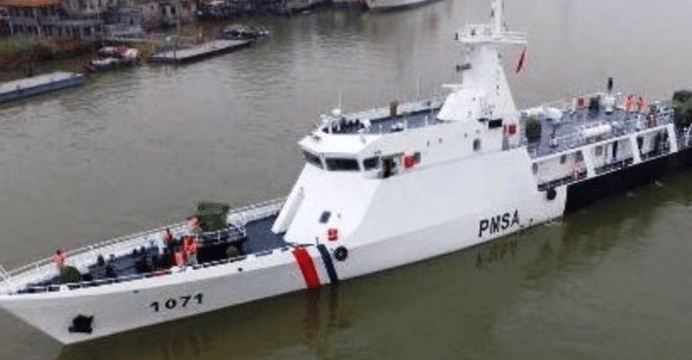 The PMSS Hingol (1070) and PMSS Basol (1071) were commissioned on 11 December 2016 in Guangzhou, China. Throughout the month, the two ships made port calls to several countries, such as Indonesia and Sri Lanka, on their way home to Pakistan.

Pakistan ordered four 600-ton and two 1500-ton MPVs from China Shipbuilding Trading Company in June 2015. Of the six ships, one of each type will be built at Karachi Shipyard & Engineering Works (KSEW).

KSEW’s illustration of the Hingol-class appears to showcase a flight deck sufficient for a single small utility helicopter, but the illustrations shown by China State Shipbuilding Corporation (CSSC) – CSTC’s manufacturing arm – are less clear on this issue. The 1500-ton MPV, which could be modelled from the P18N design sold to Nigeria, should be large enough to readily maintain a helicopter flight deck.

The Hingol-class MPVs will support the maritime end of the China-Pakistan Economic Corridor (CPEC)’s security efforts. In December, Pakistan formed a unit – Task Force-88 (TF-88) – to spearhead these efforts. TF-88 will comprise of “ships, Fast Attack Craft, aircraft, drones, and surveillance assets.” If the MPVs are joining TF-88, then it would appear that TF-88 will be an inter-organizational force, albeit between the Pakistan Navy and PMSA.