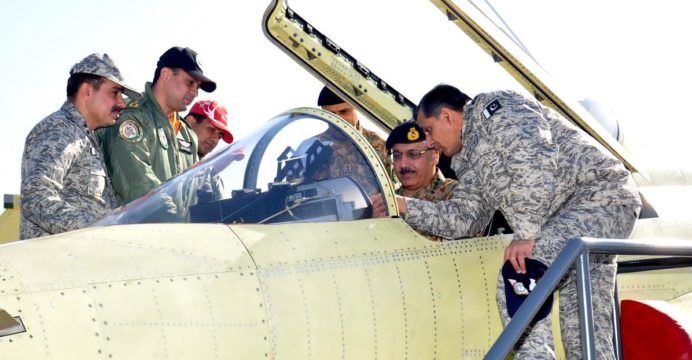 Recent photos from Pakistan Aeronautical Complex (PAC) show that JF-17 Block-II production has reached 33 aircraft (2P-33), showing that production of the variant has crossed the half-way mark. Moreover, it appears that the Pakistan Air Force (PAF)’s Block-II production run could conclude in 2017. These second-half (i.e. 2P-25/26-50) units are also configured for in-flight refuelling, albeit through a removable probe on the starboard side of the fighter.

PAC may have also produced units for export. It is not clear if these units are counted in the “2P-XX” bracket. PAC is aiming to gradually increase its annual production to 20-24 aircraft. However, if the PAF’s Block-II needs are fulfilled in 2017, PAC would be able to commit the remaining year(s) until JF-17 Block-III for exports. PAC could actively pursue new customers, such as Azerbaijan, and follow-on orders from current customers in 2017-2018. This is assuming the PAF does not opt to order additional JF-17 Block-IIs.

Another variable is the twin-seat JF-17B. The JF-17B was supposed to have been test flown by the end of 2016. The PAF could procure the JF-17B as an operational conversion unit (OCU) system and potentially lead-in fighter-trainer (LIFT). It is not known if the JF-17B orders would come from the existing Block-II run (for 50 planes) or if it would amount to additional orders. The PAF’s additional Block-II orders could come in the form of JF-17Bs, albeit at a lower rate, leaving a substantial – if not most – of PAC open for exports.