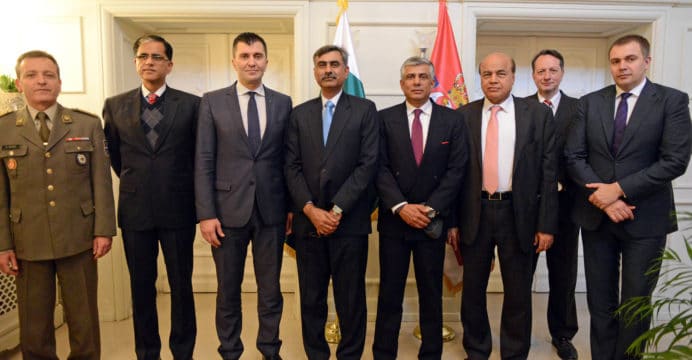 As per the Government of Serbia, the delegation met with Serbia’s Minister of Defence Zoran Djordjevic.

The two sides “agreed that the establishment of new partnerships, technology transfer for the needs of [the] defence industry of Pakistan and joint appearances [in third-party] markets represent the main opportunities for the development of military [and] economic cooperation between the two countries.”

Serbia’s Yugoimport-SDPR is competing against South Africa’s Denel Land Systems for the Pakistan Army’s requirement for wheeled self-propelled 155 mm howitzers. The NORA B-52 is a 155 mm 52-calibre gun mounted to a Russian KamAZ 8×8 truck. The NORA B-52 is capable of firing standard and base bleed shells to 20 km and 41 km, respectively. It has a maximum travel speed of 90 km/h and range of 1,000 km.

Considering that the Pakistan Army delegated was led by the Director General of Artillery, it would seem that steps are underway to begin negotiating for the NORA B-52. However, the agreement between the two sides appears to be general in scope, which may encourage Pakistani interest in other Yugoimport-SDPR programs (in tandem with the NORA B-52), such as the Lazar BVT mine-resistant ambush-protected (MRAP) vehicle, Lazar 2 armoured fighting vehicle (AFV), LRSVM Morava multiple rocket launcher system (MRLS), and/or ALAS stand-off range missile platform. The same is true for other Serbian companies, such as Zastava, Serbia’s principal small-arms manufacturer.

While there are many companies competing – or already involved – in fulfilling those requirements (e.g. MRAP, 8×8 AFV, etc), the entry of Serbia adds to the competition pool. In general, Pakistan is viewed as a prospective ‘anchor client’ to help scale new and existing products. With Pakistan entering a phase of earmarking mainstay equipment stocks for replacement, which will be a long-term effort involving relatively high output (for Serbia, Ukraine, South Africa, etc), it is an attractive prospective market, albeit in specific industries (e.g. small-arms, armour, vehicles, etc).

Technology transfers and workshare expand the supply channel and reduce costs. In addition, Pakistan and its co-production partners can consolidate export efforts in competitive markets, leveraging joint-scale and multiple production lines to access key markets, such as the Arabian Peninsula.