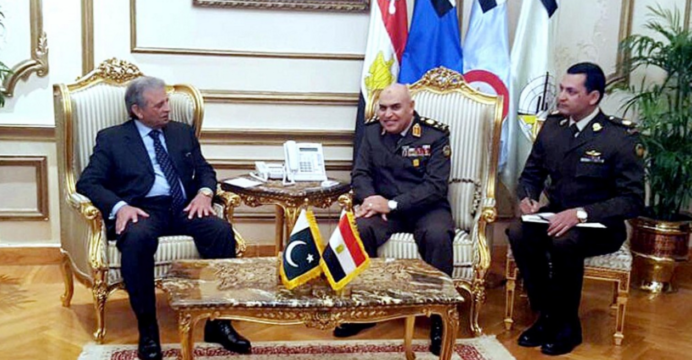 Pakistani Minister of Defence Production on official visit to Egypt

Pakistan’s Minister of Defence Production (MoDP) Rana Tanveer Hussain is on an official visit to Egypt.

Matters of “bilateral importance” were discussed in both meetings.

In prior years, Pakistan had hoped that Egypt would emerge as a major customer of the JF-17 Thunder, especially since the fighter was designed to replace legacy lightweight platforms such as the MiG-21, F-7, and Mirage III/5, which are also in service in the Egyptian Air Force.

However, along with its massive 200+ F-16 fleet, which is poised to continue serving as its mainstay fighter, the Egyptian Air Force is also in the process of inducting Dassault Rafale and Mikoyan MiG-35 (or at least MiG-29M/M2) from France and Russia, respectively.

It is unclear how the JF-17 could figure into Egypt’s future air power equation, especially because the MiG-35 is likely being sought to supplant the MiG-21 and F-7.

The notion of proposing the JF-17 Block-III as a low-cost active electronically-scanned array (AESA) radar-equipped multi-role fighter has merit, especially if Pakistan Aeronautical Complex (PAC) succeeds in securing the RD-33MK turbofan. This would equip the JF-17 with a more efficient powerplant, and in Egypt’s case, a level of commonality with the late-model Fulcrum.

Alternatively, the two sides could be examining other areas of collaboration, such as co-production of armoured vehicles. The Pakistani MoDP could also be marketing Pakistan Ordnance Factories (POF) and its development plans, especially factory upgrades and new firearms platforms.