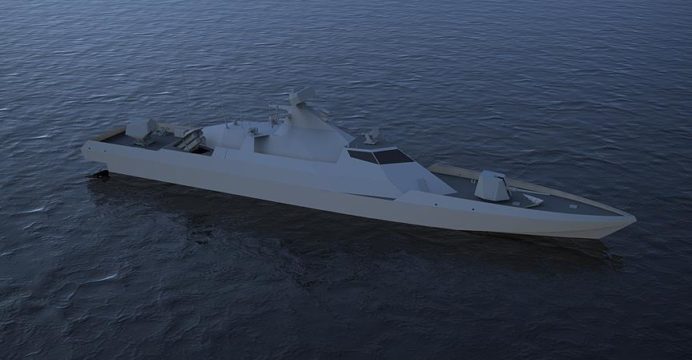 The Turkish news outlet Deniz Haber Ajansi reports that the STM FAC-55 was showcased in Karachi during the International Defence Exhibition and Seminar (IDEAS), and had attracted interest from Pakistan and a few other countries.

With a top speed of 55 knots (102 km/h), STM designed the FAC-55 to exhibit several capabilities typically found in larger corvettes, such as STM’s Ada-class. For example, the FAC-55 appears to be armed with at least four (potentially eight) anti-ship missiles (AShM) and Thales SMART-S Mk2 radar.

STM added that it is in touch with the Pakistan Navy on the FAC-55 and the MILGEM. At IDEAS, STM said that it hopes to finalize a MILGEM order with Pakistan in 2017.

Pakistan is seeking four to six FACs to protect the Gwadar deep-sea port. In addition to policing, the FACs will also be armed with AShMs, which will allow the Navy to use them as part of its anti-access and area denial (A2/AD) efforts in time of war.

As noted earlier, the selection could comprise of ships emphasized for speed, endurance, or both.

Seeing that STM is showcasing the FAC-55 with the SMART-S Mk2 radar, which can provide surveillance coverage of up to 250 km, it appears that the FAC is being positioned as something analogous to the Finnish Hamina-class FAC. The 250-ton Hamina-class FAC is capable of anti-ship warfare (AShW) as well as short-range air defence, which is done via the Denel Umkhonto-IR surface-to-air missile (SAM).

Granted, the FAC-55 design does not include a SAM solution, but the notion of configuring it with one or at least a point-defence missile system (PDMS) such as the Rolling Airframe Missile (RAM) or its Chinese analogue the FL-3000N is plausible. On the other hand, or in tandem, one could potentially configure the ship with electronic support measures equipment, which can be used to monitor nearby radar activity. Alternatively, the end-user could opt for a much less complex (and less costly) configuration, one focused on patrolling littoral waters and, in time of war, deploy AShMs.

In any case, the FAC-55 platform has considerable potential in terms of capability. In terms of the hull in of itself, the FAC-55 benefits from retractable AShM-launchers, which helps the FAC-55 maintain a smaller radar cross-section (RCS). Its superstructure appears to comprise of composite materials, helping with RCS reduction. The FAC-55’s displacement is 535-tons (C4Defense).