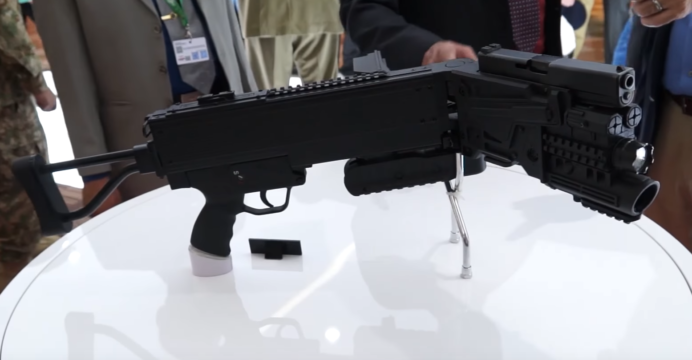 The International Defence Exhibition and Seminar (IDEAS), which is bi-annually hosted in Karachi, Pakistan, is the country’s marquee defence procurements and industry event. IDEAS is also a sound reference point for understanding the direction of the Pakistani defence market, but IDEAS 2016, in particular, could be noted as a significant event in that it may have marked the beginning of several long-term realities that will shape the Pakistani armed forces’ future procurements and decisions.

This short series has been split into three parts.

Part-one covers Pakistan Ordnance Factories. Part-two offers a brief overview of the Pakistani private sector’s increased engagement in the Pakistani defence market. Part-three, which will be released in the coming week, will study Pakistan’s central suppliers and partners.

POF also signed ‘letters-of-understanding’ (LoU), not only with specific Czech and Polish companies but Italian vendors as well. The contents of these LoUs vary. POF’s LoU with the Italian ammunition maker Fiocchi is a contractual exchange whereby POF and Fiocchi will be procuring goods and equipment from one another. The two also committed to exploring areas of technical and commercial collaboration.

On the other hand, POF’s LoU with the industry group Czechoslovak Group comprises of acquisitions, such as 155 mm base bleed artillery shells (with transfer-of-technology). In exchange, the original vendors (e.g. MSM Group) signed onto linking POF into their respective supply chains for ammunition and services.

The Pakistan Army and Ministry of Defence Production (MoDP) are heavily investing in POF. The primary impetus is to support the Army’s modernization efforts, but there is a conscious effort to scale the state’s investment in this area for additional gains (above supplying the infantry with new small arms). The offsets from the original vendors are the first step, but the Army and the MoDP are evidently working to transition POF’s entire product catalogue to a line-up of compelling and modern designs for the future.

With a reasonably strong year in terms of exports ($100 million U.S.), Pakistan clearly sees an opportunity for POF in terms of competing in the small arms and ammunition market. Granted, this year’s export surge must be attributed to purchases from Saudi Arabia, but retaining this market and adding other ones will be contingent on upgrading POF’s product line and, by necessity, its manufacturing facilities.

The offsets will certainly help in mitigating some of the required funding outflows, but the opportunity rests in being able to offer new-generation small arms to the global market. In this respect, POF will be aiming to expand in its traditional markets, e.g. the Arab Gulf and Africa, but also generate lucrative access to East Asia, Eastern Europe, and potentially even the NATO market if possible. The high-volume and disparate (or widely differentiated) nature of end-user requirements leaves considerable room for POF, even in well-fortified Western markets, provided POF can enter with the right balance of quality and affordability. The upgraded product line would be at the center of this push.

In terms of upgrading POF, Czech, Polish and Italian companies will be at the forefront of the work. The LoU between POF and Czech small arms maker Česká Zbrojovka (CZ), which will see both sides negotiating for a small arms transfer-of-technology deal (for POF), could be the lynchpin in that POF’s future small arms catalogue could essentially amount to variants of CZ products, such as the CZ-806 BREN 2 assault rifle, CZ Scorpion sub-machine gun, and/or CZ-75 handgun. The CZ-806 BREN 2 was among the rifles trialed by the Pakistan Army in the spring and summer of this year.

For the Army and POF, the decision to move ahead with CZ was likely driven by a combination of factors. There is the reality of cost and affordability, which is obviously critical for the Pakistan Army in as far as its own requirements are concerned (which requiring issuing a rifle to potentially more than 500,000 personnel). However, CZ also likely met the Army’s performance requirements in tandem with offering an effective iterative update and improvement cycle for its product(s), flexible technology-transfer benefits, and productive commercial offsets. In effect, CZ would not just be a supplier, but POF’s partner (which may enable POF to access European markets via offsets, should those be part of POF’s deal with CZ).

Poland’s Polska Grupa Zbrojeniowa S.A (PGZ) will be involved in improving POF’s ammunition supply side. Like POF’s LoU with CZ, PGZ will be negotiating on the provision of technology related to the production of ammunition. This appears to be a separate agreement from the MoU POF signed with PGZ, which could be regarding underlying manufacturing technology and processes. Italy will also be involved in this area. In addition, each one of the agreements POF has signed with its European counterparts mandate that the vendor provides technical training and education to POF personnel in Pakistan.

It will be interesting to see if POF’s dealings with CZ (or another vendor) amount to assistance in original development initiatives at POF. For example, POF officially unveiled its bolt-action Light Sniper Rifle (LSR) at IDEAS, which it developed as an affordable mainstay weapon for domestic and export purposes. A vendor with considerable design and development experience such as CZ could potentially support POF in iterating the LSR and potentially even push POF into other streams, such as anti-materiel rifles, under-barrel grenade launchers, and personal defence weapons.