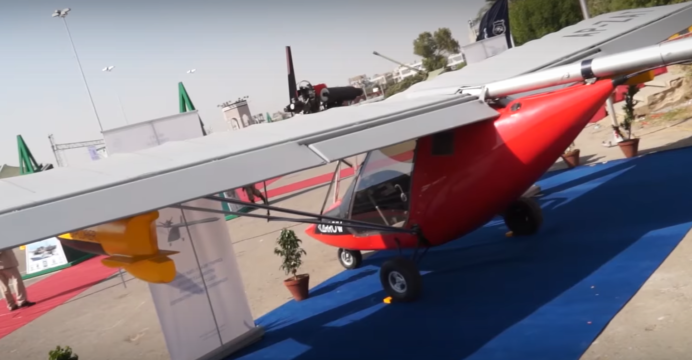 The Express Tribune interviewed Integrated Dynamics’ Chief Executive Officer, Raja Sabri Khan, on the Arrow. Khan told The Express Tribune that the Arrow is an OPV: In addition to being deployed as an unmanned aerial vehicle (UAV) or drone, the Arrow can also be manned and piloted conventionally.

This is possible because the underlying platform is an “ultra-light aircraft” capable of carrying a payload of 100-150 kg and staying in the air for up to 15 hours. The Arrow can be configured with electro-optical equipment as well as munitions. If operated remotely, the range is 250 km – which is capped due to a limited line-of-sight radio communication link. The range is much higher when manned.

Integrated Dynamics credits the fruition of the Arrow to ’15-20 years’ of research and developmental work within the company. Khan hopes that the Arrow will make inroads as an intelligence, surveillance, and reconnaissance (ISR) system, one that could be used to support the security program covering the China-Pakistan Economic Corridor (CPEC) and other nation-building infrastructure programs.

Mr. Khan stated that the Arrow will be a low-cost system, one that “is not more than a valued 4×4 jeep.” The Arrow is a compact and portable design, one that is simple enough to assemble on-site within one hour and transport in a standard 20-foot container.