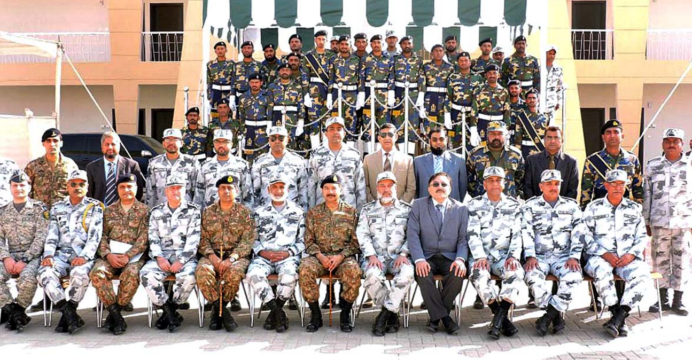 The Pakistan Navy has commissioned a new naval base in Sindh, PNS Hameed.

The base was named in memory of Lt. Commander Pervaiz Hameed Shaheed, the executive officer of the PNS Ghazi, the Pakistan Navy’s very first submarine, which had gone down in combat in the 1971 War.

In a news report by the Associated Press of Pakistan, PNS Hameed will provide Pakistan Navy assets at sea with maritime broadcast services.

PNS Hameed is also Pakistan’s first facility with very low frequency (VLF) transmission capabilities, which will enable the Navy to communicate with its submerged submarines.

The ability to securely communicate with its submerged submarines provides the Pakistan Navy an added layer of operational capability. Radio waves do not travel well in salt water conditions (i.e. the sea), hence submarines are generally incapable of wirelessly communicating while submerged. The exception to this is VLF transmissions, which can travel to depths of up to 20 metres.

Furthermore, because VLF transmissions require powerful (i.e. large) broadcast installations, it is not possible for compact platforms to transmit at VLF. When submerged, submarines can only receive in VLF. They can, however, transmit at higher frequencies via the telescopic mast when exposed above sea level.

Limitations aside, PNS Hameed at least provides the Pakistan Navy with the capacity to command its sub-surface assets once those assets are deployed and underwater. One can apply the capability to many key scenarios, e.g. such as providing situational awareness and conveying strategically relevant commands.

The VLF transmission centre is also indicative of the Pakistan Navy’s intent to heavily invest in the growth of its submarine fleet, for which eight new air-independent propulsion (AIP)-equipped ships are on order from China. With a projected fleet of 11 AIP submarines, Pakistan will possess one of the largest submarine fleets in the Arabian Sea and the Indian Ocean. The VLF transmission centre was a natural step in this regard.