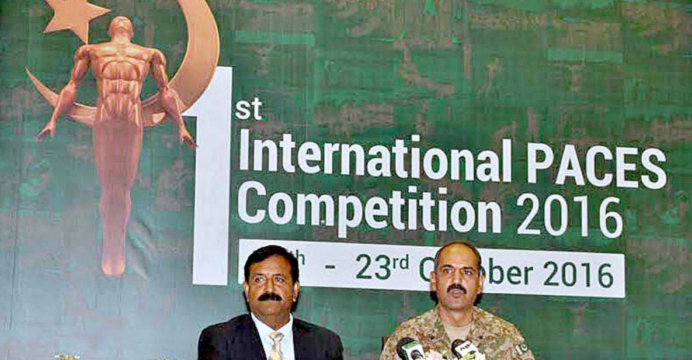 On Sunday, the Pakistan Army successfully concluded its first international infantry fitness and combat readiness competition – PACES 2016 – which was held in Lahore between 18-22 October.

Participants from 16 countries – including China, Sri Lanka, Saudi Arabia, Australia and England – took part in PACES 2016 alongside domestic units. The 20-member teams were put through a series of physically-testing exercises and combat-relevant scenarios.

PACES is short for Physical Agility and Combat Efficiency System, a wide-scale initiative of the Pakistan Army to elevate the health and fitness ability of its regular infantry, especially in the face of emerging – and heavily infantry-centric – warfare conditions, e.g. counterinsurgency operations (COIN).

If examined in the context of the National Counter Terrorism Centre (NCTC), which serves to impart armed forces and law-enforcement agency operatives with skills to fight in built-up areas and in small teams, PACES is a significant step in terms of infantry development. Through the 2000s and early 2010s, many COIN operations were spearheaded by the Special Service Group (SSG), especially from 2003 to 2008.

Since 2010, the mainstay of direct COIN engagements had gradually been shifted to regular Army units. To transfer experiences gleaned from the Rah-e-Haq and Rah-e-Nijat operations and structurally impart the necessary skill sets and competencies, the NCTC was established in 2014. To date, the NCTC has trained more than 231,000 armed forces soldiers and close to 3,500 officers and law-enforcement personnel.

Together, the NCTC and PACES indicate a strong drive on the part of the Army leadership to elevate the quality of regular infantry, which – if maintained – will translate into key operational benefits, such as lower risk of injury and longevity.

Extended education and skills training, especially in terms of operating modern equipment in line with current and emerging warfare doctrines (e.g. network-centric warfare) would be a natural addition, though it may require a substantive shift in Pakistan on how regular infantry are viewed (towards long-term assets that are integral to combat operations and valuable for building and imparting expertise).