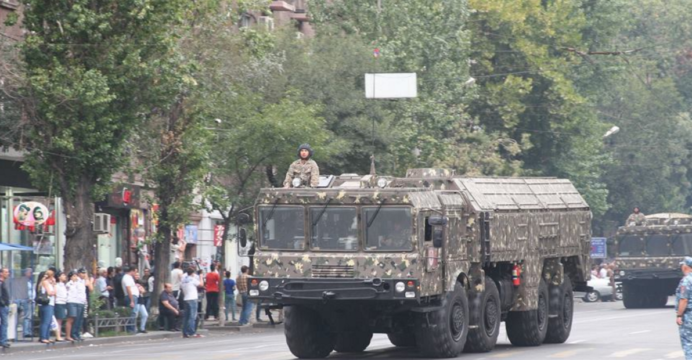 According to IHS Jane’s, Armenia had also revealed its possession of 9K58 Smerch 300 mm multiple-rocket launcher systems (MRLS) and Buk surface-to-air missile (SAM) system (which was implied through a show of its transporter-erector-launcher or TEL system).

The Iskander-E (the export variant of the SRBM) possesses a stated range of 280 km and a 480 kg warhead. With a stated accuracy of 10 metres circular error probable (CEP), it is likely that the Iskander-E’s guidance system is comprised of an inertial navigation system (INS) supported by satellite navigation and possibly even Terrain Contour Matching (TERCOM) for terminal homing.

While the Iskander-E’s range and payload parameters are within the confines of the Missile Technology Control Regime (MTCR)’s export limitations, the relative impact of the Iskander-E in the context of Armenia’s rivalry with Azerbaijan is significant. In effect, Armenia has a long-range stand-off strike asset.

While Armenia does not possess a noteworthy air force (beyond close air support aircraft and helicopters), it does have a robust air defence network comprised of long and medium-range SAMs (S-300 and Buk, respectively). It must be noted that Russia has stationed a MiG-29 squadron in Gyumri.

Unless Azerbaijan invests in multi-role fighters with sophisticated electronic warfare (EW) and stand-off strike capabilities, the offensive value of its air force is limited. (Note: In another respect, this could also be an opportunity for Pakistan in its efforts to market the JF-17 Thunder).

Interestingly, Moscow is flexible in supplying both sides, so it would not be out of the question to one day see Azerbaijan possess the Iskander-E. In fact, Azerbaijan’s Minister of Defence Industry Yaver Jamalov stated that a 280km-range SRBM design will be produced in Azerbaijan in the near future. It is possible that Mr. Jamalov was referring to the Iskander-E. This could be a sign that Azerbaijan will tailor its own offensive doctrine to mirror that of Armenia.