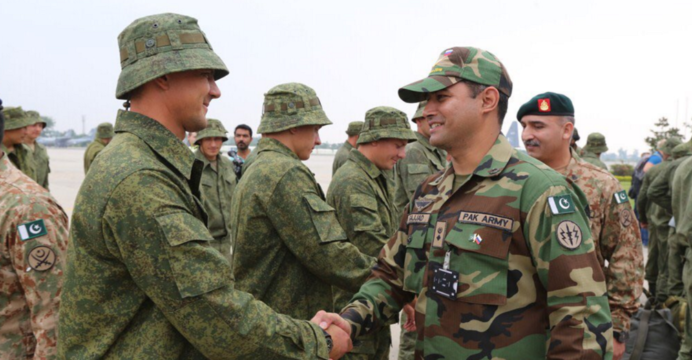 On Friday, 70 Russian soldiers had arrived in Pakistan to take part in the first ever bilateral military exercise between Moscow and Islamabad. Termed “Friendship 2016”, the exercise begun on Saturday, and as per General Asim Bajwa, the head of Inter Services Public Relations (ISPR), it will conclude on 10 October.

According to Russia Today (RT), the exercise is taking place in mountainous terrain, so as to enable both sides to readily exchange and build capacity in their respective counterinsurgency (COIN) efforts.

The exercise had drawn controversy from New Delhi, which had tried to dissuade Russia from following through with Friendship 2016. In fact, an Indian news outlet – The Financial Express – had even reported that Moscow cancelled the exercise. However, Pakistan’s Ambassador to Russia Qazi Khalilullah countered the reports by stating that Moscow will indeed be continuing with the exercise.

Since 2015, Moscow and Islamabad have made relatively strong progress in building bilateral defence ties. In fact, Moscow had even invited Pakistan to attend Army 2016, a major forum for Russian and overseas defence industry vendors to present current solutions and upcoming concepts or programs.

It would be reasonable to assume that Moscow’s invitation was a sign of its willingness to engage in arms sales and other areas of defence cooperation with Pakistan. Discretion will be shown, especially in terms of sensitive equipment such as surface-to-air missiles and multi-role fighter aircraft, but the reality that Pakistan now has a table with Russia to actually discuss and negotiate is a major shift.

Moscow’s insistence to continue with Friendship 2016 in light of not just India’s pressure, but the tension resulting from the attack on an Indian Army facility in Uri, in the disputed region of Kashmir, could be taken as a sign that Moscow’s desire to maintain defence ties with Pakistan is a firm policy goal.

It is far from certain if this will translate into a Sukhoi Su-35 sale to Pakistan, but the prospect of Pakistan securing Russia’s support to develop the JF-17 Thunder (via updated versions of the RD-33 turbofan) and other programs (e.g. light and heavy armour platforms) is plausible.

However, in the short-term, COIN-related applications and cooperation will likely form the majority of Russian-Pakistani defence ties. Not only is it an easier area for Moscow to manage in relation to its defence activities with India, but Pakistan is a valuable market in that respect as well.

The Pakistan Army’s ongoing operations in the Federally Administered Tribal Areas (FATA) require a recurrent need for light armoured vehicles, transport and utility helicopters, small arms, infantry gear, and attack helicopters. For the Russian defence industry Pakistan would provide both a viable market for COIN-centric equipment as well as an external party to offer feedback for developmental purposes.