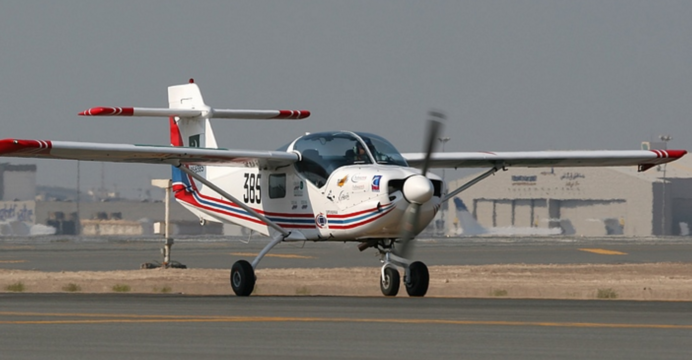 With a number of state-owned enterprises (SOE) participating at Africa Aerospace and Defence (AAD), the Pakistani defence industry is looking to make substantive inroads in the African defence market.

According to the Associated Press of Pakistan, a delegation led by the Minister of Defence Production (MoDP) Rana Tanveer Hussain is currently at AAD along with representatives from key defence vendors.

Africa – especially Sub-Saharan Africa – is emerging as an important market for Pakistani defence vendors. For example, the PAC Super Mushshak has seen notable success in the region, most recently with an order for 10 aircraft from the Nigerian Air Force. With the aim to expand the Super Mushshak’s market share in the region, PAC is attending AAD with a static display as well as a flight demonstrator. It is not known to what extent, if at all, the JF-17 Thunder is being marketed at AAD.

With export orders worth $100 million U.S. for the current year, POF should be well positioned to make gains in Africa as well. Even in markets where Pakistan has limited access to (e.g. in North Africa) may see the value in acquiring low-cost ammunition and small arms, especially for use with law-enforcement and paramilitary entities. Defence contracts from the region are also within POF’s grasp.

Separately, Mr. Hussain noted that it was his aim to reduce the defence industry’s reliance on government funding – especially subsidies – as a means to operate. Although securing valuable export orders would be an obvious method to achieving this goal, it is possible that commercial offsets and non-Pakistan armed forces related production partnerships are being explored. South Africa, in particular, has vendors able and willing to engage in such initiatives, which could be something of interest to the MODP.

Commercial offsets can be had by pairing Pakistani military contracts with not just transfer-of-technology requirements, but also a push for having a proportion of the contract’s value re-invested into the Pakistani economy. For example, in addition to fulfilling the Pakistan Army’s need for new assault rifles, the winning vendor could also be required to source components from POF for its global supply chain.

Non-armed forces related partnerships would be initiatives that do not necessarily involve purchases from the Pakistani military. An example of this includes Turkish Aerospace Industries (TAI)’s decision to contract Anka drone parts manufacturing work to PAC in 2013. Pakistan did not acquire the Anka for its own use.

It is important to note that Mr. Hussain explicitly stressed that privatization was not on the cards. Rather, efforts are being directed at making the defence industry vendors into profitable entities without having to depend on domestic armed forces contracts or – in their absence – subsidies. It is worth noting that this is not an unusual practice. Denel Group, while publicly owned, operates autonomously and does not develop solely develop systems for domestic use (which has thinned since the 1990s). In fact, even the Chinese defence industry – while heavily connected to the state in many respects – can act autonomously in research and development areas.