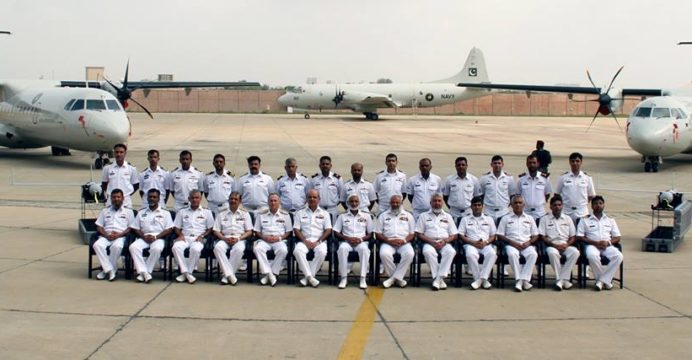 During the induction ceremony, the Pakistan NavyŌĆÖs Chief of Naval Staff Admiral Muhammad Zakaullah stated that the induction of the ATR-72 was part of the NavyŌĆÖs long-term modernization roadmap, Aviation Vision 2030.

Admiral Zakaullah added that the induction of the ScanEagle UAV was ŌĆ£yet another major transformation in terms of [the] acquisition of new capabilities.ŌĆØ The ScanEagle UAVs will contribute to the PNŌĆÖs roster of intelligence, surveillance, and reconnaissance (ISR) assets.

In 2014-2015, Pakistan contracted a German firm ŌĆō Rheinland Air Service (RAS) ŌĆō to convert two Pakistan Navy ATR-72s into maritime patrol aircraft (MPA) with anti-submarine warfare (ASW) capabilities. As per the Ministry of Defence Production (MoDP)ŌĆÖs most recent publication, these ATR-72s will be delivered to Pakistan by 2017-2018. It is possible that this third ATR-72 will eventually be sent for conversion, especially since the platform is considered a key part of the NavyŌĆÖs Aviation Vision 2030 plan.

Presently, the ATR-72 is effectively the only new MPA platform in the Pakistan NavyŌĆÖs acquisition pipeline. While the NavyŌĆÖs existing P-3Cs will continue to serve an integral role in the NavyŌĆÖs fixed-wing fleet, the ATR-72 could emerge as a key supplementary MPA in the Navy. The ATR-72 is comparatively affordable and it benefits from a ubiquitous commercial supply channel (for aircraft and spare parts). Moreover, the selection of RAS to configure the ATR-72 into an MPA platform indicates that the PN has the flexibility to select its choice of subsystems (e.g. search radar, electronic support measures, etc) onto the aircraft. With these aspects in mind, one could expect to see Pakistan gradually enlarge its ATR-72 MP/ASW fleet.

The Pakistan Navy ordered an undisclosed number of ScanEagle unmanned aerial vehicles (UAV) from the U.S. in September 2015 for a little over $15 million U.S. (IHS JaneŌĆÖs). According to IHS JaneŌĆÖs, Pakistan had expressed interest in the ScanEagle in 2008, and in 2010, the U.S. agreed to open negotiations for it.

Produced by Insitu, a subsidiary of Boeing, the ScanEagle was brought into U.S. military service in 2004 (and U.S. Navy service in 2005). Since then, the intelligence, surveillance, and reconnaissance (ISR) drone has joined well over a dozen foreign military users, especially in Asia and the Middle East. The ScanEagle can be configured to carry a variety of electro-optical equipment for day and night-time usage. The drone reportedly has a range of 1,500km, an endurance of over 28 hours, and a maximum altitude of 16,000 feet (i.e. 4876 metres) (Naval-Technology).