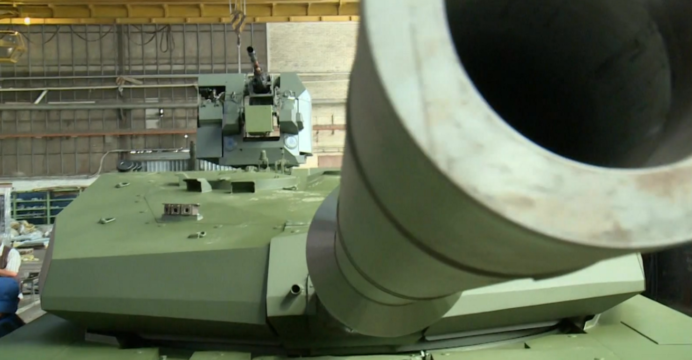 Opinion: The al-Khalid MBT should draw inspiration from Poland’s PT-16.

The Polish defence industry is reportedly teasing examples of its upcoming armoured solutions, namely the so-called PT-16 main battle tank (MBT) and Anders armoured fighting vehicle (AFV). Before continuing, it must be noted that the images and the information were from a single unofficial source – a blog known as Below The Turret Ring (BTTR). However, the images seem to originate from a region-restricted video, and the blog’s content is dependable and accurate.

Based on the information available (please visit BTTR for complete details), the PT-16 MBT seems to be a very promising system. According to BTTR, the PT-16 was developed primarily for the export market (as the Polish Army itself has chosen the Leopard 2 to form the mainstay of its own tank force). The PT-16 is derived from the PT-91 “Twardy”, which is directly based on the legacy – and very ubiquitous – T-72, which had formed the mainstay of many armies in the Eastern Bloc and the developing world.

However, the combination of major design changes and subsystem additions make the PT-16 a different and truly superior MBT to its progenitor, the T-72. For example, the PT-16 boasts a new welded turret, which is armed with a 120mm smoothbore gun, the standard tank gun calibre in NATO. The armour is comprised of a new modular composite design, one that beckons to modern concepts implemented on the German Leopard 2 Evolution. There is also a remote weapon station.

Additional details of these improvements (as well as other additions) can be found on BTTR’s post, but the general point at hand is that the PT-16 is evidence that legacy platforms – if configured with current day subsystems and technologies – can remain relevant. The PT-16 is an example of where investments in specific subsystems and developmental avenues can remedy a tank platform’s existing shortfalls, and in turn, produce – at minimum – a promising new solution.

In one case, Pakistan’s al-Khalid series comes to mind. Currently, the al-Khalid MBT has not seen a massive level of production since its initial batch of 300. Strenuous economic problems in the late 2000s, as well as the pivot to revitalize and upgrade existing armour stocks, put the al-Khalid on the backburner. Originally, the al-Khalid was – along with the al-Zarrar (another valuable example in extensive platform development) – to form the mainstay of Pakistan’s tank force.

Despite the recent dearth in production, Pakistan still has to scale the original investment it had made in the al-Khalid. In the early 1990s, Pakistan adopted the NORINCO T-90 platform from China, and in turn, spent the subsequent decade configuring the design to align with the needs of the Pakistan Army. This was primarily done by integrating the design with various third-party subsystems, such as the 1,200hp 6TD-2 diesel engine acquired from Ukraine, into the tank. An iterative update in the form of the al-Khalid-1 was also revealed during the 2014 International Defence Exhibition and Seminar (IDEAS).

Today, observer expectation has shifted to the supposed al-Khalid II, which should (or at least ought to) amount to a significant platform upgrade (akin to what the Polish PT-16 is to the PT-91). There are scarcely any verifiable details into the al-Khalid II, but if the Pakistan Army and Heavy Industries Taxila (HIT) are still in the process of examining upgrade avenues, drawing inspiration from the Polish defence industry could be an option. In fact, the combination of substantive changes to armour technology, the integration of new internal subsystems (e.g. thermal imager, laser-targeting, etc), an active protection suite (APS) with hard-kill measures, and a new engine should not be taken lightly. If executed along a comparable pattern as that of the PT-16, the al-Khalid II could be decidedly different MBT (in practical terms) to the al-Khalid-1.

Like its current iteration, HIT and the Pakistan Army are likely to drive the development of the al-Khalid II along the same lines as that of the al-Khalid. In other words, third-party subsystems will be central to the al-Khalid II’s development. However, in contrast to the 1990s, the leading foreign vendors may in some respects be different. For example, in light of the recent climb in defence relations with Turkey, Pakistan could potentially look to Aselsan for internal subsystems, and perhaps even show interest in the Aselsan Akkor APS program. On the other hand, Pakistan could return to Ukraine for a new engine, such as its recently unveiled 1,500hp 6TD-3 diesel engine.

While importing certain subsystems is an attractive route, some areas of platform development may require Pakistan to make substantive domestic investments. For example, current generation composite armour technology is a prized gem for every vendor in possession of it (in terms of transfer-of-technology); few vendors will part with it, and those that do, will exact a high return from the buyer. The domestic production of composite armour is fully scalable in that it can be implemented on hundreds (if not thousands) of tanks as well as armoured vehicles over several decades. Finding partners to help HIT form the capacity to produce such armour with minimal foreign dependence ought to be a central priority.

In any case, the al-Khalid II – conceptually at least – has the potential to be a significant improvement over its present form. It would be incorrect to state that the cost savings of another al-Khalid would make it easy to phase out the very large of legacy T-59s, but the al-Khalid II could end up being affordable enough to build a potent tank force in both relative numbers and quality. For the most part, the scope will only be as high or low as the Pakistan Army defines it.