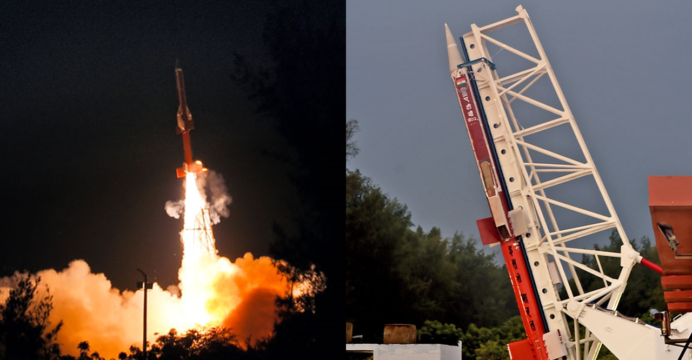 The test was conducted from ISRO’s Satish Dhawan Space Centre in Sriharikota, Andhra Pradesh. After a 12-hour countdown, the scramjet engines lifted-off at 0600-hours local time.

The following are key details from ISRO’s press release:

“The important flight events, namely, burn out of booster rocket stage, ignition of a second stage solid rocket, functioning of Scramjet engines for 5 seconds followed by burn out of the second stage took place exactly as planned.

Although ISRO’s scramjet test was primarily aimed at examining the success of its core technologies, such as the ignition of the scramjet’s air-breathing engines at supersonic speed or the fuel-injection systems, the platform itself has immense – and strategically significant – potential.

Scramjet – short for “supersonic combusting ramjet” – is a very high-speed propulsion system. It depends on an initial launch system, such as a solid-fuelled rocket, to propel the scramjet-powered aircraft into the air such that the scramjet’s air-breathing engine can rapidly take in the incoming air, which will pass through as exhaust during a sustained high-speed (potentially hypersonic) flight.

The test is an important step, not only for India’s strong and increasingly prominent space program, but also the looming development of hypersonic munitions. In fact, the U.S.’s X-51A Waverider hyper-glide vehicle (HPV) utilizes a scramjet engine. It is important to understand that the value of the HPV does not purely rest in its speed (which can be attained by rockets as well), but the fact that it is an engine that is pushing the object through the sky. This imbues the aircraft with valuable capabilities such as atmospheric maneuvering (and that too at supersonic or hypersonic speeds).

India is now among a handful of countries – along with the U.S., Russia, European Space Agency, and potentially China – in possession of scramjet engine technology. ISRO’s system utilizes hydrogen for fuel. Besides military applications, the technology will also form the foundation for increasingly efficient and affordable space launch vehicle development. India will be able to scale the research and development investment across a large number of civil and defence applications.