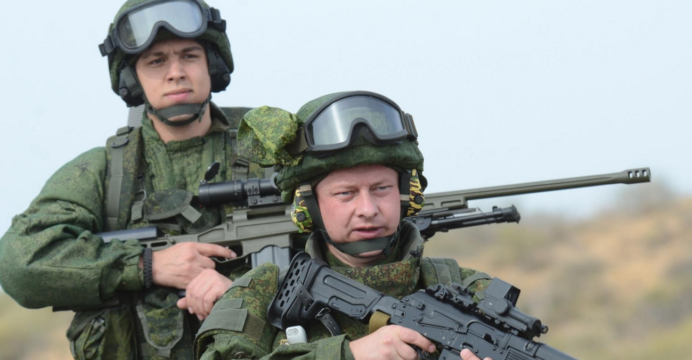 Russia is receiving overseas requests for its Ratnik infantry system.

Components of Russia’s Ratnik infantry system are receiving requests from a number of prospective overseas clients, according to the director general of the Central Research Institute of Precise Machine Building, Dmitry Semizorov (Army Recognition).

The Ratnik was made available for export in November 2015. According to Semizorov in 2015, Pakistan, Iraq, and Kuwait were among the countries who had expressed interest in the Ratnik (Sputnik News).

The Ratnik system is an ongoing program, one meant to address Russia’s future infantry equipment needs. It has gone through two iterative cycles and a third generation version is under development (Russia Beyond the Headlines).

While its marquee components – such as its tactical computer and sensors (for monitoring the user’s heart rate, respiratory rate, and blood oxygen saturation) – symbolize the Ratnik’s core strengths, the Ratnik is actually a comprehensive suite comprised of 40 components.

In addition to portable computer equipment, it also includes a wide range of protective gear as well as a survival kit composed of rations, water filters, medical supplies, sleeping bag, and even a tent. The entire Ratnik suite weighs 20 kg.

In effect, it is a kit meant to decisively enhance the survivability and versatility of infantry, particularly in combat environments dependent on fast-moving infantry teams to drive operations. This is especially key for infantry units engaged in built-up urban environments; these teams patrol and maintain a presence, and are susceptible to threats such as ambushes, snipers and improvised explosive devices (IED).

While the Ratnik is not going to be able to protect the user from all threats, it can provide an added layer of survivability thanks to its protective armour and accompanying medical kit.

Interestingly, two of the countries (i.e. Pakistan and Iraq) that Semizorov named in 2015 are currently involved in counterinsurgency (COIN) operations. In Pakistan’s case, there are built-up environments, and the Pakistan Army had spent the past six or seven years in training its infantry to optimally operate in these conditions. The Ratnik’s protective and support gear could have been of interest to Pakistan (in 2015).