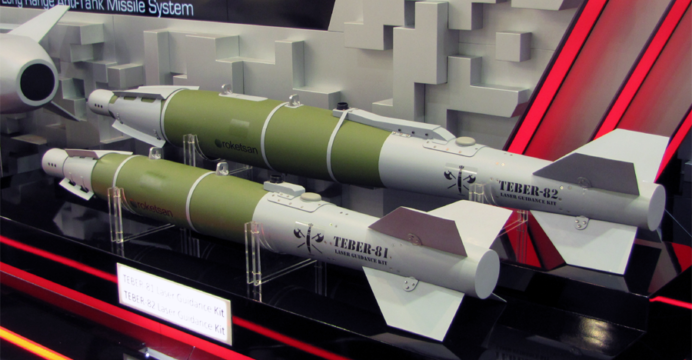 For example, if the user is targeting moving armoured vehicles, they will utilize the Paveway/Teber’s semi-active laser homing (SALH) seeker, which is used in conjunction with a targeting pod or secondary laser designator. If the target shifts to a fixed installation, such as an armoury or ammunition dump, location data can be fed into the LGB, which would then switch to INS/GPS. A detailed discussion on the topic can be found on an earlier article on Quwa. Like its predecessors, the Paveway Dual Mode Plus is a kit for converting Mk-80 series general purpose bombs (GPB) into LGBs.

The Pakistan Air Force (PAF) utilizes LGBs in its counterinsurgency (COIN) operations, primarily from its F-16C/D and Mid-Life Update (MLU) units. It is also apparently looking to deploy the JF-17 into these attack operations as well. The PAF is currently in the process of integrating the Aselsan ASELPOD to the Thunder, which will enable the fighter to use LGBs without the support of an external laser-designator source.

For the PAF (as well as other air arms), the added cost of a ‘dual-mode’ LGB over the cost of maintaining LGB and INS/GPS PGB stocks will be a primary consideration. Based on Lockheed Martin’s marketing, the Paveway Dual Mode Plus is being positioned as a natural successor to the existing Paveway laser-only kits.

At this stage, the cost of SALH and INS/GPS guidance systems has been scaled across tens of thousands of units, and the added cost would come from integrating both onto the same kit (for converting a GPB to a LGB/PGB). If the added cost is marginal or non-existent, then one should expect the PAF to replace used Paveway LGB stocks with Paveway Dual Mode Plus. In fact, according to Lockheed Martin, the Paveway Dual Mode Plus is compatible with a user’s existing Paveway II and JDAM logistical bases.

With the PAF configuring the JF-17 with the ASELPOD, the Roketsan Teber – compatible with Mk-81 (119 kg) and Mk-82 (227 kg) – could be a real option. The Teber functions along the same lines as the Paveway Dual Mode Plus – i.e. it is a LGB augmented with INS/GPS. Alternatively, China could produce an analogous solution, but based on its BeiDou Navigation Satellite System.

The PAF is not short of options in terms of ‘dual-mode’ munitions. The main question is whether a singular guided bomb kit is more optimal and cost-effective than maintaining two stocks. Besides the unit cost of the dual mode LGB, the latter would also depend on how the PAF intends to use INS/GPS PGBs, such as its Joint Direct Attack Munition (JDAM) and domestically built Range Extension Kit (REK). In the case of the REK, the dual-mode LGB is no replacement, the REK is at heart a stand-off range weapon (SOW) capable of reaching 50-60km. The Paveway Dual Mode Plus and Teber are CAS munitions.

The primary advantage borne from these dual-mode LGBs is that it offers redundancy in case of adverse weather. For example, if an area is covered with a sandstorm or heavy rain (which would bury laser ‘locks’), then the INS/GPS could be used to provide back-up guidance coverage. Of course, the PAF would need to have the ability to acquire location data of its targets. Depending on solely INS/GPS against moving targets would be difficult; if an enemy armoured column deploys its passive countermeasures – e.g. smokescreens – the INS/GPS would be of much less use. For moving targets (with passive self-protection suites or under adverse weather conditions), millimeter wave (mmW)-seekers (which are essentially radar-guided munitions, but for air-to-ground applications) would be necessary.

Overall, it seems the inclusion of a dual-mode LGB would be beneficial, but to the PAF, the added benefits may not be substantial enough to warrant a shift over the current approach. While the Paveway Dual Mode Plus and Teber offer improvements, they do not fundamentally resolve some of the emerging problems CAS users would face in combat. As described above, the pervasive use of passive self-protection suites – which include laser burying smokescreens – warrant the need for active seeker air-to-ground munitions, particularly mmW (imaging infrared is an option as well, but electrically powered vehicles with lower temperatures may become common in the future as well). On the other hand, if the cost is marginal or equivalent to acquiring “single mode” LGBs, then there is nothing inherently wrong with shifting to dual-mode munitions.