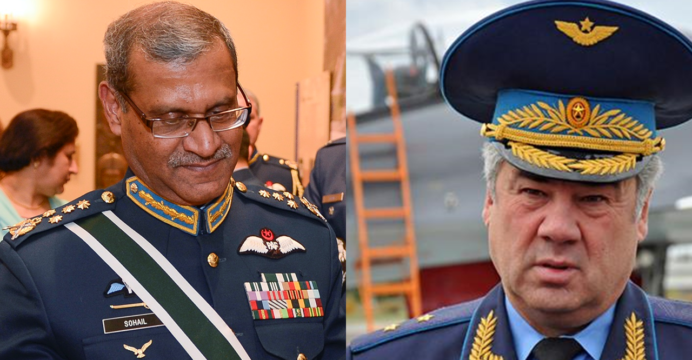 While in Moscow, ACM Aman met with Colonel General Bondarev and discussed a range of matters of mutual interest. Aman also met with top representatives of Russia’s aviation industry, and had sought to explore areas of collaboration between it and its Pakistani counterpart.

According to Pakistan’s Daily Times, the two sides “agreed to increase mutual cooperation in particular and boosting the aviation technology jointly.” ACM Aman also stressed the need for the PAF and VVS to engage in training and air exercise schemes in the near future.

Russia and Pakistan have gradually been thawing their defence ties over the past several years. Granted, Russia’s longstanding – and lucrative – relationship with India has placed a dampener on expectations for big-ticket sales between Moscow and Islamabad (at least for the short-term), but this official visit by Air Chief Marshal (ACM) Sohail Aman (on an invitation from Russia) is a clear indication that tangible efforts are being made by both sides. Specific details were not given, but there are a number of ‘stand-out’ issues that are likely of interest for both sides.

At present, the Pakistan Air Force (PAF)’s core aims consist of improving the JF-17 Thunder, and in laying the groundwork for its next-generation fighter platform. In terms of the former, the PAF depends on the RD-93 turbofan, a minor derivative of the early model Klimov RD-33, an engine line that powers the MiG-29. Given the antiquated nature of the RD-93 (and the inefficiencies it causes in terms of maintenance and use), the PAF could potentially be pushing for a current version of the turbofan, such as the RD-33MK (which PAF officials noted as a possible RD-93 replacement in April).

In terms of long-term prospects, the inclusion of the Russian aviation industry in assisting with the next-generation fighter in some shape or form would be interesting. While this idea is purely speculation, it is worth noting that RSK MiG (formerly known as Mikoyan) did assist in the development of the JF-17 (albeit through China). There is genuine expertise and support to be had from Russia, if not in direct relation to the fighter, then perhaps in terms of fighter development in general (e.g. capacity building in terms of infrastructure and skilled human capital).

The Pakistani government had claimed that it would consider Russian fighters in lieu of new-built F-16s from the U.S., it is unclear if this is something on the PAF’s roadmap, at least at this time. In fact, in late 2015 there were numerous reports of Pakistan expressing interest in the Sukhoi Su-35 (IHS Jane’s). Although India is working to source a larger proportion of its weapons from the West, its defence ties with Russia are still quite lucrative for Moscow. This is not something Russia will tamper with for the sake of a smaller set of sales with Pakistan, not unless India’s value in the equation drops substantially.

That said, it seems Moscow’s intentions, at least in the areas it feels are viable, are genuine. It is likely that work in areas such as helicopters (and setting up MRO facilities for them in Pakistan), armoured vehicles, general technology support and training programs will proceed. Big-ticket acquisitions, especially in areas that could pose a direct threat to India (e.g. fighter aircraft), are unlikely to happen, at least in the short or medium-term.