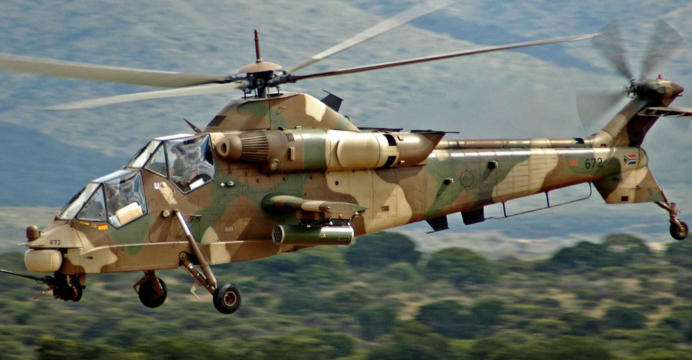 The Denel Rooivalk is perhaps the complete epitome or reflection of the South African defence industry, a picture embodied into a complete – yet deficiently supported – solution. An excellent overview of its development can be found at Engineering News, a leading South African news publication. In short, the Rooivalk conceived in the late 1980s by the then South African Defence Force (SADF) as a means to counter the growing armour threat in Angola and other regional rivals.

Unfortunately, South Africa’s lack of expertise and capacity in aerospace development prohibited it from readily developing a new platform for its needs. Complex – but absolutely critical – components such as the powerplant, rotors, gearboxes, etc, could not feasibly developed in South Africa, and such, the South Africans had to draw on an existing base platform. Although performance and capability was an objective, South Africa had to be practical and realistic as well.

Around the time the Rooivalk was being conceptualized, South Africa was at work to heavily upgrade – or essentially re-manufacture – its Aerospatiale Puma transport helicopters into something comparable to the newer Super Puma. This was the Oryx, which resulted in a longer and more powerful helicopter. With the aim of achieving a largely common maintenance and logistics channel, South Africa opted to base the Rooivalk on the core underlying design (e.g. rotors, turboshaft, etc) of the Puma-based Oryx.

Although this was not the simplest design choice possible, it was still significantly simpler and more feasible to carry out in comparison to a clean-sheet design. However, the aspirations around performance and capability were still in place. The Rooivalk was not envisaged as a medium-weight design akin to the A-129 Mangusta or AH-1 Cobra, but a heavyweight platform akin to the AH-64 Apache and Mi-28 Havoc.

The Rooivalk prototype carried out its maiden test flight in 1990, but by then fundamental geo-strategic and political shifts were underway in southern Africa, changes that would permanently anchor the South African defence industry from achieving its potential. The collapse of sharp regional threats and renewed access to the Western arms market essentially put a heavy dampener on the Rooivalk. The country’s other marquee program, the Denel Carver multi-role fighter, was scrapped altogether.

Instead, like the bulk of South Africa’s defence programs, the Rooivalk was pivoted towards the export market. The South African armed forces could no longer serve as the domestic user base that could anchor a program and absorb its development costs, overseas users had to be sought to distribute the load and to make development feasible. The SAAF slashed its requirements from 36 helicopters to 12. In the end, the program’s development was halted, especially after the collapse of a possible deal with Turkey. With Eurocopter looking to drive sales towards the Tiger, its incentive to let the Rooivalk piggyback on its Puma core (e.g. turboshaft, gearboxes, etc) was practically nil.

Around this time a private South African company – ATE – tried to gather momentum around what seemed like a new medium-weight attack helicopter design (designated “New Attack Helicopter”), but the idea would collapse. Since 2007, the Denel Rooivalk was for all intents and purposes a dead program. With the Russians making a strong entry into the heavy attack helicopter market with the Mi-28NE, and the abundance of new medium-weight designs such as the Z-10, T-129 and AH-1Z, one would be excused for believing that the book on the Rooivalk would remain closed. However, Denel is at work to re-open it.

In late 2015, Denel was actively pushing the idea of not only re-opening Rooivalk development (in terms of upgrading South Africa’s 12 serving units), but to eventually produce a Rooivalk Mk2. While retaining the airframe, powerplant and other dynamic components, the Rooivalk Mk2 will incorporate the on-board electronics systems of today (and presumably the future). It will also make use of modern munitions such as the Mokopa laser-guided anti-tank missile and A-Darter air-to-air missile.

Like its predecessor, the Rooivalk Mk2’s prospects will hinge on overseas adoption. To be precise, the only real shot this program has for success is if a prospective buyer contributes to the platform’s development. Denel is cognizant of the challenge of such an ask, and as such, not only is it trying to maintain a relatively low-cost and low-risk approach (by persisting with the Rooivalk’s existing airframe and powerplant). It claims that it could begin producing service-ready Rooivalk Mk2s in four years from the point the aircraft’s development is initiated.

In addition to a relatively low-risk program, Denel is offering substantial transfer-of-technology benefits to the overseas development investor. The following statements from Denel (via Defence Web) point to this aspect of the Rooivalk Mk2:

“Denel Aviation is interested in seeking partners and clients in the development of a new generation Rooivalk…In this process, significant opportunities exist for technology transfer as well as production and MRO participation. In order to exploit the intellectual property vested in Rooivalk at an economically feasible level a broad client base would be required,” Denel said.

“Through a joint venture programme of industrial participation and transfer of intellectual property, an indigenous attack helicopter production, support and upgrade/modification capability can be established.”

From Denel’s language, it seems that it is trying to preclude the risk of dwindling long-term support and marginal rate of returns. The customer that invests in the Rooivalk Mk2’s is being promised the capacity to fully maintain the Rooivalk Mk2 indigenously, irrespective of Denel in South Africa. That said, there are still a number of issues that need to be sorted out before Rooivalk development can continue in earnest. For one thing, the turboshaft and dynamic components are still going to be imported. Airbus Helicopters, which acquired the Puma-line from Eurocopter, would need to approve of Denel’s work. Denel is working towards securing Airbus’ support.

Unfortunately, the opportunity for the Rooivalk Mk2 rests with the most difficult set of prospective customers. A country interested in acquiring a small number aircraft off-the-shelf will not be able to select the Rooivalk Mk2 as development and production would not be on its acquisition roadmap. As such, it would almost certainly procure a widely supported and used platform. One could point to Qatar’s recent purchase of 24 AH-64E Apache Guardians as an example of this fact.

The prospective customer base of the Rooivalk Mk2 essentially boils down to a country with a sufficiently large requirement and an incentive to raise domestic support, be it in terms of maintenance, repair and overhaul (MRO), parts manufacturing or even full-scale production. Ideal customers of this nature would typically be in NATO or well-serviced alliances with the U.S. (e.g. South Korea). However, with their readily available access to industry leading Western technology – alongside commercial offsets and transfer-of-technology benefits – these countries have little incentive to go with South Africa.

So, the criteria of the prospective customer are as follows: (1) a sufficiently large requirement to absorb the development investment and utilize the domestic MRO and production base; (2) very limited access to arms from the West or Russia; (3) an incentive to maintain a domestically backed attack helicopter fleet; (4) and ample funds to spend on development.

Pakistan could be such a customer (at least in Denel’s eyes). Yes, the central deficiency stems in Pakistan’s ability to fund such a project, but the prospect is not impossible, especially if Pakistan considers dedicated attack helicopters a central pillar of its close air support (CAS) strategy. A requirement for a large number of helicopters can be present, but in such a case, the need for domestic maintenance, repair and overhaul (MRO) and life-time servicing is essential.

The Rooivalk Mk2 could be an attractive heavy attack helicopter platform, and Denel’s willingness to offer MRO and parts manufacturing would be a very useful advantage should Pakistan opt to build a sizable fleet with the Rooivalk. It may not be interested in full-scale local production. Instead, its focus may be on securing affordable long-term support. Interestingly, the Pakistan Ministry of Defence Production (MoDP) even expressed interest in Romanian-built Puma helicopters. With Airbus Helicopters in the process of shifting H215 Super Puma production to Romania by 2019, the sight of the Rooivalk and Super Puma – with a common MRO base – would offer synergy. Moreover, Pakistan could use the purchase of H215s as a means to acquire Airbus’ support in providing the necessary components for the Rooivalk.

That said, even if the technical and cost aspects were to line-up, why would Pakistan go for the Rooivalk over perhaps the Z-10? Even though the Z-10 is a medium-weight platform, what is to stop China from developing a heavier variant, especially once the WZ-16 turboshaft (currently being developed by AVIC and Safran Group) comes into play? Moreover, if the Rooivalk Mk2 succeeds and is in production in both Pakistan and South Africa, would China be comfortable with a strong African competitor eating into its potential markets in that continent? Consider Nigeria or the potentially other countries now comfortable with small off-the-shelf purchases, thanks to the existence of guaranteed long-term support and servicing from South Africa and Pakistan?

If the Mi-28ME becomes a viable option, which it may be considering Pakistan is in touch with Russia, then the Army will likely prefer that tried and tested platform. The Rooivalk Mk2 would not only require a lead time in terms of development, but Pakistan would have to source modern electronic subsystems from a third-party. It could perhaps ask Turkey, but does Turkey not have an incentive to offer the T-129? On the other hand, while the T-129 uses an American turboshaft, most of other components are sourced from Europe and Turkey. To feasibly operate the T-129, Pakistan would essentially need to find a steady supply-line for the turboshafts (and secure MRO). Britain’s Rolls-Royce could be that source.

If forced to depend upon the development cycle, Pakistan will have to weigh whether it would like to put its eggs in South Africa or China; China could alleviate the onus of development funding (thanks to the depth of the People Liberation Army’s needs). That said, while domestic MRO and parts manufacturing would have to be negotiated with China or Russia, at least it is clear what Denel has on the table.