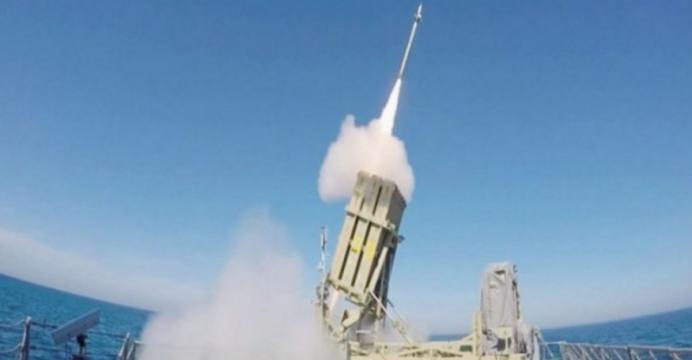 On 18 May, the Israel claimed it had successfully tested the naval version of its Iron Dome rocket defence system from a Sa’ar 5 corvette. Colonel Ariel Shir, the Israeli Navy’s head of combat systems development, said that the C-Dome was tested from the INS Lahav.

According to IHS Jane’s, the C-Dome was developed to help protect offshore gas platforms against rockets, which (alongside the rare anti-ship missile attack) have been the principal munition threat faced by Israel.

The rationale behind the C-Dome is to have a cheaper defensive system for use against unguided rockets and shells; the C-Dome would complement the pricier, but more capable, Barak-8 medium to long-range surface-to-air missile (SAM) system.

The Iron Dome – and C-Dome specifically – is a very interesting system. The missile system in use is named the Tamir. At heart, it was originally envisaged as a counter rocket, artillery, and mortar (C-RAM) system, essentially an extended range point-defence missile system (PDMS).

It is not clear to us if the Tamir uses an active or semi-active radar-homing seeker, but the use of the Elta AESA radar clearly indicates an emphasis on accuracy. In fact, although it is tailored to stop unguided shells or rockets, something has to be said about IAI and Rafael’s ability to develop a SAM that can intercept small high-speed munitions. The Tamir is also much cheaper than many SAMs (locked at $50,000 a unit).

Taking this and putting it on the Sa’ar 5, a 1275 ton (full load) corvette, is all the more impressive (not to mention the synergy accrued by pairing it with the same radar used by the Barak-8 SAM).